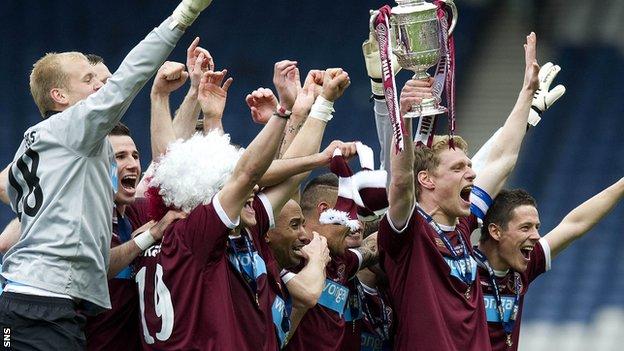 With costs being cut at Hearts much more emphasis will be placed on young players being brought through from the club's academy.

The team that lifted the Scottish Cup in May has already lost key members.

Ian Black and Stephen Elliott have departed and the likelihood is Suso Santana will also be on his way.

Fans' favourite and last season's top-scorer Rudi Skacel has intimated on more than one occasion that he will be leaving.

In his nine months at the club the only addition Paulo Sergio made to his squad was Craig Beattie and the big striker is also now out of contract.

The new manager will have a core of established players to pick from, including central defenders Andy Webster and Marius Zaliukas, while exciting attackers David Templeton and Andrew Driver remain at the club.

But what of the emerging talent at Tynecastle?

Born in Germany from Ukrainian parents, the strong tackling 20-year-old midfielder is known as something of a dead ball expert.

He is highly thought of by the club's coaches and was on the bench at Hampden when Hearts demolished Hibs 5-1.

Jason Holt is another who made brief appearances in the first team last term, having been voted the Clydesdale Bank Under-19 player of the season in 2010/11.

The attacking midfielder made his first team debut against St Johnstone in March scoring Hearts' only goal in a 2-1 defeat.

Then we have Jamie Walker, who is also held in high regard.

The 18-year-old forward has yet to play for the first team but has been a regular in international squads at all age levels from Under-15 upwards.

The career of these three players could also lead us to a possible successor to Sergio, who turned down the offer of a new contract on reduced terms last week.

Prychynenko, Holt and Walker have all been farmed out on loan to Raith Rovers at various spells during the past two seasons.

Their coach at Starks Park was John McGlynn, who left Tynecastle in 2006 when offered the chance to manage the Fife club.

McGlynn is well thought of by those in power within Tynecastle and he has a track record of success with young players when previously at the club.

He coached the Under-19 team that included Craig Gordon and Stephen Simmons to Youth Cup success against Rangers in 1999.

There are other teenagers at Tynecastle waiting for a chance to make a breakthrough.

Fraser Mullen was handed his debut in the Scottish Cup match against Auchinleck Talbot and Sergio made the defender his man-of-the-match.

Kevin McHattie is another to keep a close eye on.

The left-back spent time on loan at Alloa last season where manager Paul Hartley was singing his praises.

These five youngsters are all under contract for at least one more season.

Driver and Templeton are 24 and 23, respectively, while Ryan McGowan, 22, played and scored in the Scottish Cup victory and Scott Robinson, 20, is another young man with first team experience.

The club's director of football John Murray is well known for his ability to spot natural talent at a young age.

Murray has been at Hearts for over 16 years, having joined the club when Jim Jefferies and Billy Brown were at the helm for the first of their two terms in charge of the first team.

Given the new climate of austerity at Tynecastle, Hearts may yet lose more of their cup-winners if the right offers come along.

But, with few Scottish Premier League rivals in a position to strengthen, the new manager and fans can take heart from the impressive array of home-grown talent breaking through.