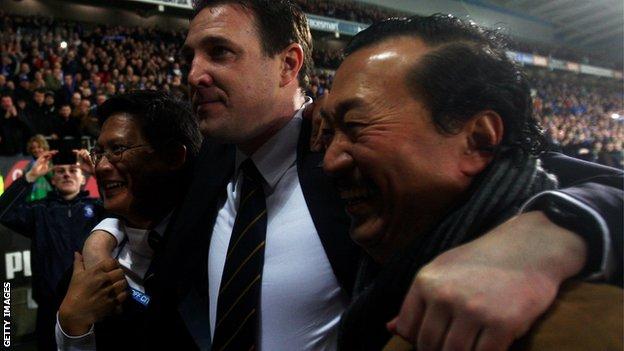 Cardiff City manager Malky Mackay has said supporters must trust the club's Malaysian owners after the change of colours from blue to red and the introduction of a new badge.

The club said the changes are part of a "major and significant" investment pledge from the owners.

Mackay says the club are in a better position as a result of the changes but understands some fans' objections.

"We've got to trust our backer," Mackay said.

"Everyone's trying to do their best for the football club going forward."

Cardiff will be wearing red rather than blue home shirts from next season after investors Tan Sri Vincent Tan and Dato Chan Tien Ghee pledged their commitment to the club.

Chief executive Alan Whiteley said the driving force behind the move was to put Cardiff on a firm financial footing, with the aim of gaining promotion to the Premier League.

"Obviously it's going to be different but change is constant in life. If you embrace and go with it then success can happen," Mackay told BBC Sport Wales.

"I absolutely get the fact that the red or blue debate goes on and some of our fans will feel it's moving away from tradition.

"But on the other side of that I've also been at Watford where we were two hours from administration and that being the case it's a scary place to be.

"If we don't have backing from a major financial backer then there's a good chance that could happen to football clubs.

"But at the end of the day I think we've got to be realistic that we've got Tan Sri [owner Vincent Tan] is actually backing our football club.

"He's someone who could have left the football club after the play-off final against Blackpool [and] could have walked away at that point.

Mackay said he was flattered to have been linked with the managerial role at former club Norwich City after Paul Lambert left the Canaries to join Aston Villa.

Norwich have since appointed Chris Hughton and Mackay insists he still has work to do at Cardiff City.

"[Norwich] is a club, that's well documented, is close to my heart," he said. "I had a long and successful period there.

"I do know the owners Delia [Smith] and Michael [Wynn Jones] well and I know that the chief executive has done a very good job at the football club.

"But I've got a project that I've started here, a project I'm working with really good people at this football club.

"I'm enjoying living in south Wales and working for Cardiff. This is a club that I want to push forward."