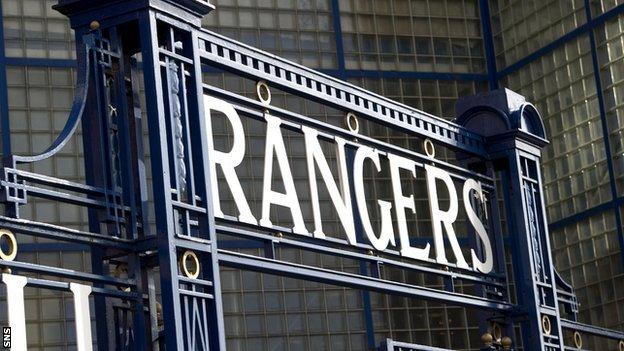 Rangers will re-form as a new company after a creditors' deal was rejected by Revenue and Customs.

It means clubs will have to vote on whether to re-admit Rangers to the Scottish Premier League.

"The club will continue to operate as it has always done but in a new company structure," said the administrators.

Green, who said he was "hugely disappointed" by HMRC's decision, will now seek to buy the club's assets for £5.5m and form a "newco", under the terms of the deal his consortium struck with administrators Duff & Phelps.

"We will be liaising with the football authorities at the earliest opportunity to establish our position regarding the SPL," said Green, who will approach the Scottish Football Association and the SPL.

What is a CVA?

Rangers' footballing fate will be decided by their 11 fellow SPL members. There is an SPL board meeting at Hampden on Monday to discuss the league's inquiry into alleged dual contracts at Rangers.

They could hold a vote then if a newco proposal can be put together in time. Perhaps more realistic is for the 11 clubs to vote at the AGM next month.

In recent weeks clubs have expressed the dilemma they face: Rangers' presence in the SPL brings revenue through the turnstiles and from broadcast deals, but many fans have said they will not return if "sporting integrity" is not seen to be upheld.

These supporters have been in contact with their clubs to demand that they vote against Rangers playing in the SPL next season. Their preference is for Rangers to apply to join the Scottish Football League and to start again in the Third Division.

HMRC said that the sale of the club "is not being undermined, it simply takes a different route".

In a statement it said: "Liquidation will enable a sale of the football assets to be made to a new company, thereby ensuring that football will continue at Ibrox.

"It also means that the new company will be free from claims or litigation in a way which would not be achievable with a CVA. Rangers can make a fresh start."

Green's consortium had hoped to have its CVA - offering nine pence in the pound at best - approved by creditors when they meet at Ibrox on Thursday so that the club could exit administration in mid-July.

But Green needed major creditors HMRC and Ticketus, who had loaned money to owner Craig Whyte in exchange for future season ticket revenue, to vote in favour to avoid the assets being sold off.

"The solemn promise I can make to Rangers fans today is that this club will continue as Rangers Football Club and will continue to play at Ibrox Stadium," said Yorkshireman Green.

"I am hugely disappointed by the decision of HMRC not to support the CVA proposal and that disappointment will be felt acutely by Rangers fans across the world.

"Frankly, I do not see what benefit will be achieved by this decision. My consortium's offer for a CVA amounted to a total of £8.5m.

"Now that we will have to complete the purchase via the formation of a newco, the purchase price and therefore the amount available to creditors will be £5.5m.

"I can understand HMRC deciding that football clubs which do not pay their taxes need to be punished, but by effectively banning Rangers from Europe for three years all that will happen is that there will be less revenue generated by the club and consequently less money paid over to the taxman."

Rangers entered administration on 14 February and await the outcome of a First Tier Tax tribunal at the Court of Session in Edinburgh over unpaid taxes - the so-called "Big Tax Case".

If that decision goes against the club, it would mean a further bill of anything from £35m to £70m.

That would have reduced the pence-in-the-pound deal in the CVA to close to zero.

The club's total debts to unsecured creditors listed in the CVA was £55m, with HMRC accounting for £21.5m of that sum.

BBC Scotland has learned that Duff & Phelps held a meeting with HMRC on Monday and were told of their decision.

Duff & Phelps say HMRC's decision was based on "its general policy of not agreeing to a CVA where there is strong evidence of non-compliance by a company with its tax liabilities".

They said HMRC had agreed to consider the CVA proposal along with all other options but decided that the club's level of indebtedness made it unacceptable.

The administrators say HMRC would also have rejected the other offers for the club that proposed a CVA.

Administrator Paul Clark added: "HMRC has taken the view that the public interest will be better served with the liquidation of The Rangers Football Club plc as a corporate entity."