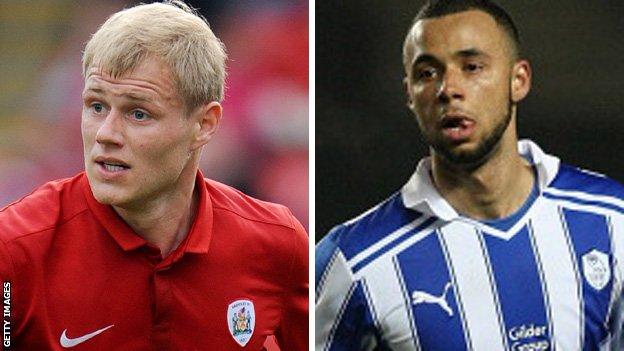 Manager Paolo Di Canio wants to bring in left-back McEveley, 27, on a permanent deal following his release by Barnsley, while Tottenham midfielder Bostock, 20, would return on loan.

"With McEveley - he's on a free and there should be no problem," Di Canio told BBC Wiltshire.

And regarding Bostock, the Italian added: "We're talking with them [Spurs] and we'll see what's going on."

Both players arrived at the County Ground in March and remained with the League Two champions until the end of the season.

McEveley made nine appearances during his spell with Swindon but was one of six players released by Barnsley in April.

Bostock played four games for the Robins and although Di Canio is keen to bring him back, he admits the deal could be delayed by clashes in the pre-season schedule.

"With Bostock, the only problem is pre-season," said Di Canio. "The top clubs want to do the loans after their pre-season but I don't like this.

"For me, the first period of the season is crucial. It's where you build not only their condition and fitness but you teach them how to prepare.

"If they don't let me have the player before the pre-season I will find it difficult."