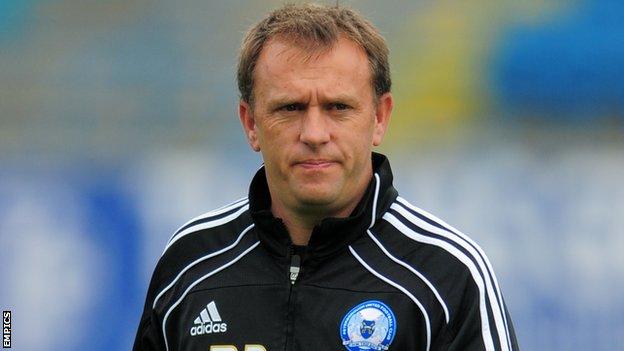 The Bees have narrowly avoided dropping out of the Football League in each of the last three seasons.

He told BBC London 94.9: "The last few years have not been the greatest. We want to put that to bed and be in the top half of the table.

"I want to try and improve everything they have. I'm ambitious and want to achieve success."

The post at Underhill is Robson's first as a number one, having held coaching posts at Charlton Athletic, Gillingham and, most recently, Peterborough United.

"It's been something I've been wanting to do for quite a while now and I'm delighted I've got the opportunity at Barnet," Robson continued.

"One thing which attracted me was that they've got a brand new training ground, which is fantastic.

"There's an opportunity to develop the youth team as well as the first team and the squad that we'll have."

Barnet have restructured their coaching staff, with Robson set to work alongside director of football Paul Fairclough at the League Two club.

Fairclough was instrumental in the process of appointing a new manager and Robson is confident of maintaining a strong relationship.

"Paul is there for me if I need him," the 43-year-old continued.

"There's been lots of talk about the club, how it's run and what we're doing. It will be a collective thing in terms of what we do.

"Ultimately, I'll be picking the team and the way we play will be down to me.

"It's important I lay down my own philosophy in terms of what I want to do and how I want to do it, but I've got the help if I need it."