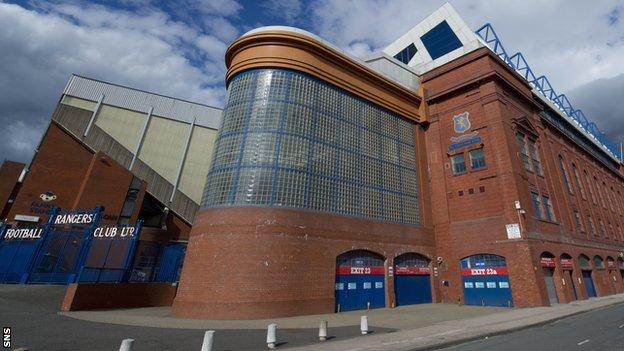 Can Rangers newco get back in to the Scottish Premier League?

When the company is liquidated, its registrations with the Scottish Football Association and the Scottish Premier League will be terminated. The new company will not automatically inherit the old registrations.

The newco would have to request a transfer of Rangers' share in the SPL. The SPL will then vote on whether to admit the newco to the top-flight. The SPL rules require eight of its member clubs to vote in favour of a share to be transferred to another company or club. This would require seven other SPL clubs to vote in favour of transferring the oldco's share to the newco, since Rangers will have a vote.

Will the SPL issue any punishments to the newco?

This has been the subject of much debate recently. The SPL decided not to vote on rules introducing punishments for a prospective newco, because the situation has not yet arisen.

The SPL insists it will deal with each situation on its merits. However, it is likely that the SPL would seek to apply sanctions to a newco in an attempt to deter other clubs from following the same route. Sanctions could include a period of reduced income from media rights and sponsorship, a points deduction and restrictions on player transfers.

What if the application to transfer the SPL share fails?

If the SPL rejects the share transfer, the new club could then make an application to join the Scottish Football League. If successful, it would then apply for SFA membership. The new club can only apply for SFA membership when it has a competition to participate in. An opening would arise in the SFL if a club is promoted from the First Division to replace Rangers in the top flight.

All applications to the SFA are assessed on their merits. However, the SFA say any sanctions placed upon the oldco would be taken into consideration to act as a deterrent to other clubs following the same route. Additionally, the new club will not be able to participate in European competition for three years.

At present, Craig Whyte is the majority Rangers shareholder after Sir David Murray sold his shareholding to the Motherwell businessman for £1 in May 2011.

Whyte currently holds a floating charge over Ibrox, Murray Park and the Albion Street car park, which were transferred to Liberty Corporate Limited in April. Liberty Corporate is Rangers' parent company and its sole shareholder is another company known as Liberty Capital Limited, which is owned by Whyte and registered in the British Virgin Islands. Whyte's father, Thomas Whyte, is the sole director of Liberty Corporate.

The floating charge is not guaranteed if the club is liquidated and could be subject to a legal challenge by the appointed liquidators.

Will the players all transfer to the newco?

Under the Transfer of Undertakings (Protection of Employment) Regulations 2006, all employees have the legal right to transfer to the new employer on their existing terms and conditions of employment and with all their existing employment rights and liabilities intact.

It could prove problematic for the newco to maintain the level of wages currently being paid to players if the club's income is reduced. Similarly, employees are under no obligation to accept the terms of the transfer to the new company and can terminate their employment contracts.

Effectively, this means that when Rangers is liquidated, all current players would be free to seek new clubs and there would be no transfer fees due to the newco. However, there could be complications with player contracts under Fifa, Uefa and SFA regulations.

Can the newco buy players?

Technically, there are no restrictions on the new club purchasing players during allocated transfer windows as long as it holds an SFA licence.

However, the current club is under a transfer embargo for entering administration on 14 February and was also handed a 12-month transfer embargo by an SFA appeal tribunal for bringing the game into disrepute, which was set aside by the Court of Session in Edinburgh. The SFA appelate tribunal has still to meet to discuss what punishment should be handed down to Rangers.

The punishment would not automatically transfer to the newco, although the SFA has said any sanctions levied on the old club would have to be taken into consideration when assessing the newco's application for SFA membership in order to deter other clubs from following the same route.

What happens to the club's history?

The Rangers Football Club PLC is a public limited company registered in Scotland (company number: SC004276) and was incorporated on 27 May, 1899. When the current company is officially liquidated, all of its corporate business history will come to an end.

The answer lies principally in the eye of the beholder. Some supporters will view the new Rangers as the same Rangers, while others will feel the old Rangers no longer exist.