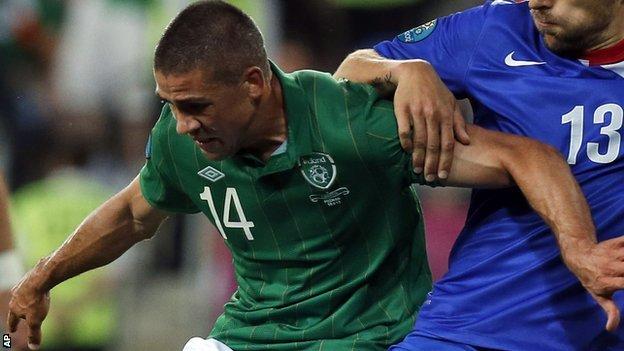 Stoke City coach Mark O'Connor says that Republic of Ireland striker Jon Walters would be up to the challenge of facing Spain or Italy in Euro 2012.

Walters figured as a substitute in Saturday's 3-1 defeat by Croatia, and could start against Spain on Thursday if Giovanni Trapattoni makes changes.

Since making his international debut in 2010, Wirral-born Walters has now made eight appearances for the Republic, his one goal coming in the 4-0 win against Estonia in Tallinn in November.

But O'Connor insists that playing in his first major championship at the age of 29 will not faze the much-travelled former Blackburn Rovers, Bolton Wanderers, Hull City, Wrexham, Chester City and Ipswich Town striker.

"It's the way he approaches every game," said O'Connor. "And it's why he's been so successful for us.

England have had some injuries in that centre-back position and yet Ryan Shawcross's name doesn't seem to have cropped up at all. I find that very difficult

"His progress with us over the last three years has been fantastic.

"It proves what can be done with a lot of hard work and no lack of talent, you can get to these heights.

"I know Giovanni Trapattoni has tended to go with Robbie Keane and Kevin Doyle all the way though the campaign and stuck with them and I'd find it odd if he changed now after one defeat.

"But I thought Jon did very well when he came on against Croatia and, for his sake, it would be fantastic experience for him to play against Spain or Italy in a major championship."

While Walters and team-mate Glenn Whelan, who won his 40th cap for the Irish, were on duty in Poznan, there remains disappointment in the Potteries that there were not more Stoke players at Euro 2012 - Peter Crouch and Ryan Shawcross both having been overlooked by England.

"The Crouch one did mystify me," added O'Connor. "I was very surprised that he wasn't picked, especially as we are quite limited in forward positions and we are without Wayne Rooney for two games. I actually thought he was a certainty to go.

"In Ryan's case, they've had some injuries in that centre-back position and yet his name doesn't seem to have cropped up at all.

"I find that very difficult, but Roy Hodgson will have his reasons and we're all hoping they do very well.

"At least it means they'll be fit for next season."