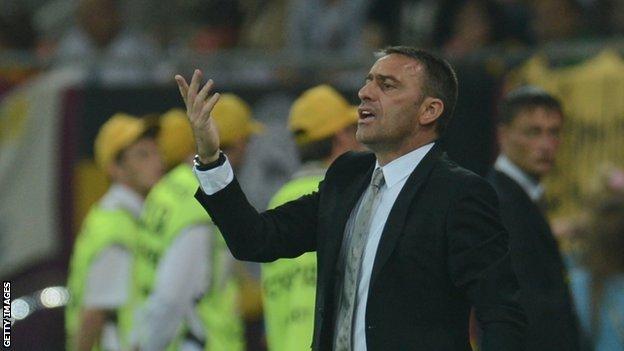 Portugal coach Paulo Bento is confident his team can reach the quarter-finals despite their poor start to Euro 2012.

Bento's side head into Wednesday's meeting with Denmark hoping to make up for an opening 1-0 loss to Germany, which saw his tactics criticised.

But he is sure Portugal can respond to their unpromising position to qualify for the knock-out phase.

Our strategy remains to be strong all round, not to rely on counter-attacking

"I continue to think we can get through. We're in a difficult situation but we have been here before," he said.

Denmark began their campaign with a shock 1-0 victory over the Netherlands and, with a final group game to come against the Dutch, Bento accepts that his team must improve against Morten Olsen's side.

But Bento has defended the playing style of his team, who have only managed one goal in their last four matches, ahead of the crucial game in Lviv.

The Portugal coach has also promised to stick with under-fire striker Helder Postiga, who did not manage a single shot against the Germans.

He added: "We lacked a greater capacity in the final third of the pitch against Germany, particularly in the first half.

"But our strategy remains to be strong all round, not to rely on counter-attacking.

"We've only won one of the last four against Denmark but we don't dwell on past games. This is another time, with different preparations and in different circumstances. Denmark are in a more comfortable position."