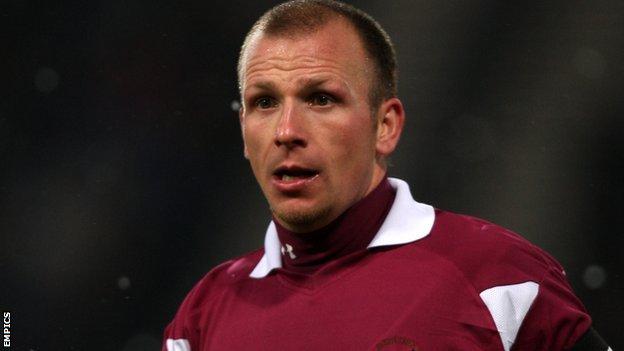 Bristol City will sign midfielder Jody Morris on a one-year deal when his St Johnstone contract expires on 1 July.

The Saints captain, 33, links up again with City boss Derek McInnes, who left McDiarmid Park for the

Morris started out with Chelsea and was at Leeds, Rotherham and Millwall before moving to Scotland in 2008.

"Jody is someone I know well and someone I trust," McInnes told the Bristol City website.

"He was a vital part of my team at St Johnstone and I'm looking forward to working with him again here at Bristol City.

"Jody has excellent experience as well as superb fitness levels and I know he is capable of performing well in the Championship on a regular basis."

Morris said on Twitter: "I won't be re-signing with the saintees next year... I leave the club with a heavy heart after 4 successful years.

"I've enjoyed my time immensely at St Johnstone, playing with some great team mates and met some lovely people at the club. Being captain of St johnstone was and will always be something I'm very proud of.

"Honestly overwhelmed with the messages from the saintees and other SPL teams fans.. Many thanks!! And now being welcomed by my new teams fans at Bristol City...thanks very much..can't wait to get started!!!"

The 21-year-old defender had loan spells with Stockport and Yeovil Town last season and also made two first-team appearances for City.