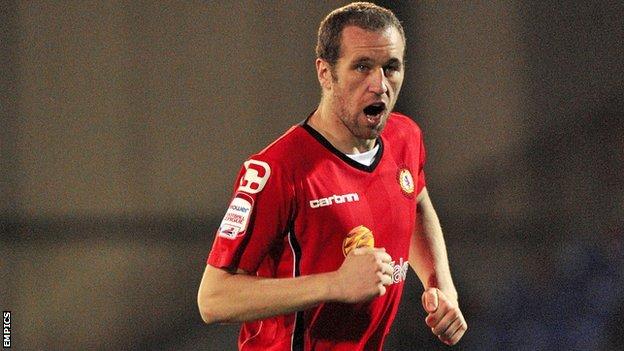 New Port Vale signing David Artell is out to put his painful rejection by promoted Crewe Alexandra behind him by helping his new team to go up too.

But the 31-year-old is adamant that Vale are good enough to follow them up.

"I'm sure a lot of players come out with the same rhetoric at this time of year, but I'm here for promotion," Artell told BBC Radio Stoke.

"Port Vale would have been there or thereabouts last season without an imposed penalty. Hopefully, it will be the same next season."

I'm not going to whinge. It's part and parcel of being a pro. You've got to move on and take it on the chin

The level-headed Artell is not one to live in the past, however, and is grateful to have been able to make a move which did not involve having to move house.

"I could have gone for more money and a longer contract elsewhere," he added. "But geography had a big part to play in my decision.

"Promotion possibilities, money, length of contract, they all come into it and Port Vale ticked all those boxes."

It also means that Artell is operating back at a level with which he is at his most comfortable.

Prior to that day out at Wembley in May, he had only painful memories of the play-offs, having been in the Morecambe side battered 6-0 by Dagenham & Redbridge in the League Two semi-final first leg in 2010.

But, while being relegated from the Football League at Shrewsbury and then crashing in the play-offs with Morecambe were the lowlights, last season turned out to be his career high.

He nearly missed out altogether when he damaged his hamstring hitting a crucial winner against Cheltenham in April, an injury which ruled him out until the semi-final second-leg.

Then came the high of Wembley followed by the instant, unexpected low of being let go.

"Every two years, you're going to have that worry about job security. Did I think I'd have it this summer? Probably not.

"The fact that I'd just lifted the trophy at Wembley two days before quickly becomes irrelevant.

"As far as success on the pitch is concerned, my time at Crewe was second to none. A fantastic day at Wembley which capped a fantastic season.