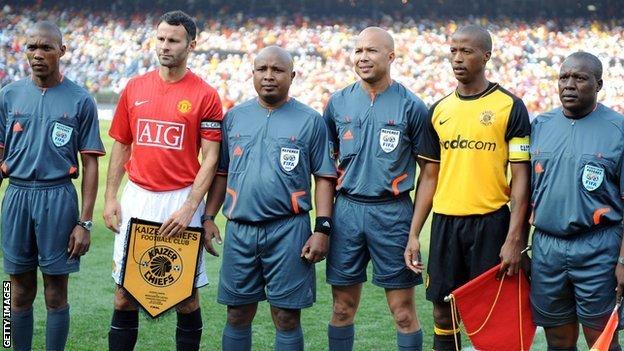 Manchester United have confirmed they will start their pre-season with two matches in South Africa next month.

The 19-time English champions will take on AmaZulu FC in Durban on 18 July before travelling to face Ajax Cape Town in Cape Town three days later.

United have staged previous pre-season trips to South Africa in 2006 and 2008.

"The training camp and matches in South Africa will be an important part of our preparations for the 2012/13 season," said club chief executive David Gill.

"[The tour will be] an excellent chance to renew our acquaintance with our loyal and enthusiastic fans in South Africa.

"Everyone has fond memories of the visits there in 2006 and 2008 and, of course, of the exceptional organisation for the 2010 Fifa World Cup."

The opening match will take place at the 54,000-capacity Moses Mabhida Stadium in Durban on Mandela Day.

After the tour of South Africa, Manchester United will continue their pre-season preparations with trips to China and Norway.

In 2008, United followed their South Africa visit with a friendly match against then FA Cup winners Portsmouth in the Nigerian city Abuja.