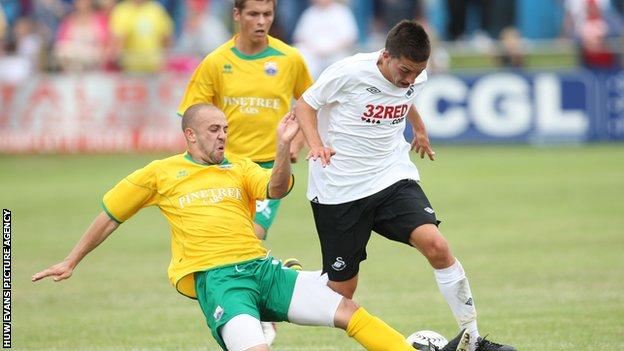 Swansea City midfielder Lee Lucas has signed a new three-year contract that will keep him at the Liberty Stadium until 2015.

Aberdare-born Lucas, who celebrated his 20th birthday last Sunday, is the latest homegrown player to commit his future to the Swans.

"I couldn't have asked for a better birthday present,'' said Lucas.

Lucas came through the Swans Centre of Excellence and was on loan at League Two side Burton Albion last season.

He made his Championship debut as a substitute against Sheffield United under former boss Brendan Rodgers, and played once for Burton before a back injury ended that loan spell.

"Even though I only played one game for Burton, it was just great to start a league game and experience the pressure of fighting for points," said Lucas.

"It helped me mature as a player and I hope to progress from that experience.

"I had an injection in my back a fortnight ago and now I've just got to rest before pre-season starts.

"I'm aiming to have a good pre-season and hopefully push myself in and around the first-team squad.

"It's a great time to be part of Swansea City and I'm determined to work hard over the next three years to prove myself."

The U17, U19 and U21 Welsh international had one year left on his contract at a club he joined as a nine-year-old before he moved into the Swans youth team in 2008.

He went on to win the Youth Development Player of the Year Award in 2009-10 and secure his first professional contract which has now been extended.