Germany's 2-1 win over the Netherlands can be viewed as a tale of two strikers.

By the time Robin van Persie had put his problems in front of goal behind him, Mario Gomez had fired Germany to the brink of the last eight.

Such was the clinical nature of Gomez's display that at the point his second goal went in, he had had the fewest touches of the ball of any player on the pitch.

Two goals against the Dutch followed his strike in the 1-0 victory over Portugal, when he was about to be substituted before scoring the winner.

Gomez, who scored 41 goals in 52 games for Bayern Munich last season, has also recovered from missing a host of chances in the Champions League final, which his side lost to Chelsea on penalties.

Alan Shearer on Match of the Day

"For the first goal, he gets in between the centre-halves, but he still has a lot to do. It was a brilliant touch and an equally good finish.

"The second was great centre-forward play because he trusts Mueller, who wins the ball. From there, he wants to get in the box and gets a lovely ball from Schweinsteiger. He doesn't even look because he knows where the goal is. It's a brilliant, brilliant finish.

"An identical thing happened in the second half. He gambled on another Mueller flick and was able to create another opportunity. Overall, Gomez was the big difference."

"At the minute Gomez is very confident, having scored lots of goals for Bayern. He's always there. He's a box player, he's dangerous in the air and he can finish.

"For his first goal, the turn was absolutely fantastic. The Netherlands were playing for offside and were holding a line, but Gomez span and was definitely onside. Great goal." 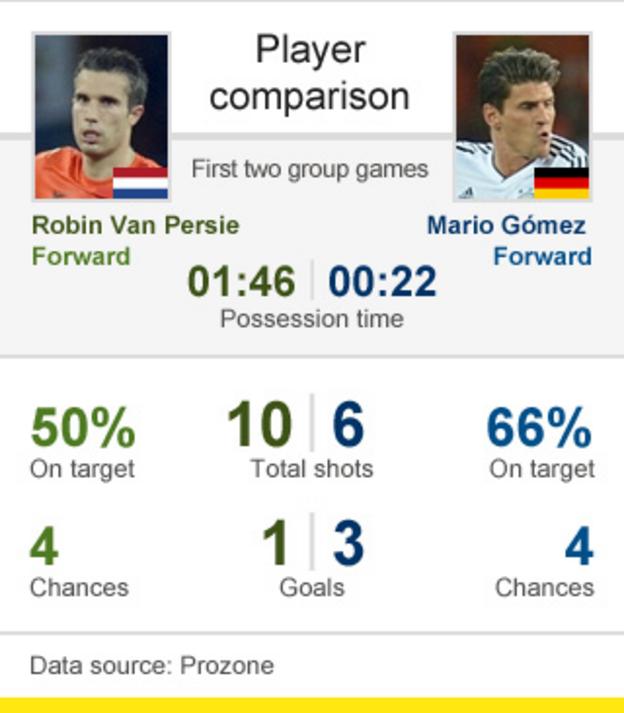 What they said about Gomez:

"The Germans are so clinical. Gomez is stunning." - Martin Keown

"He comes alive when the ball comes into the area. The first goal is a great take, a great touch, and he just passes it into the back of the net. Quality." - Mark Lawrenson

"My goal against Portugal was very important for me. The coach and the important players always backed me, and that was important, because the last three days were very difficult for me. Despite my goal I was criticised very harshly." - Mario Gomez

"Mario scored two goals from two chances. It shows his class. He got the winner against Portugal. He is doing his job." - Germany coach Joachim Loew.