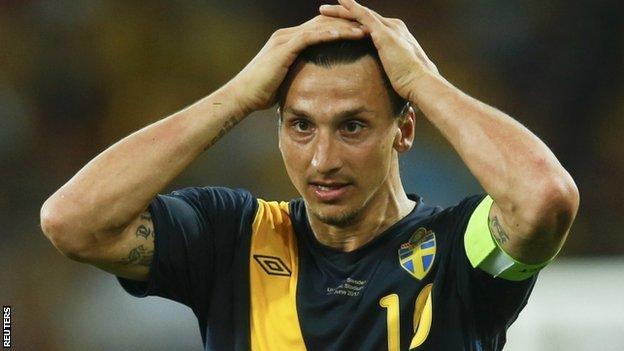 That is what people will be saying before England's second group game at Euro 2012 and, although it will not be quite as simple as that in Kiev on Friday, Roy Hodgson's side clearly have a much better chance of victory if they do.

Yes, he can be infuriating but I don't think you could ever doubt his ability - he is up there with the best all-round strikers in the world.

What is so good about him? Well, he is big and strong and he scores spectacular goals. He is powerful in the air but he has got a very good touch and also brings other people into the game.

The reason he sometimes gets up people's noses is because of his relaxed-looking playing style, and of course his attitude too.

A big part of his game is confidence, or arrogance even. But I don't think it does him any harm. As a striker, it probably helps if you harness it in the right way.

Besides, he is good enough to back it up.

He is Sweden's star but their problem is getting the best out of him.

There are reports he has fallen out with a couple of his team-mates at this tournament already. I don't know if that is true or not, but sometimes on the pitch you get the feeling they are not really on his wavelength at times.

Getting the ball to him is one thing and he showed what he can do with the right service when he scored in Monday's defeat by Ukraine. But you have to remember he cannot do everything on his own.

That is the problem when you play for an international team that is not as strong as your club side and I am sure Portugal's Cristiano Ronaldo would sympathise.

Ibrahimovic's scoring record for Sweden - 32 goals in 78 games - is still very good, but no matter how well he does it is clearly going to be very difficult for him to win anything with Sweden.

Like Ronaldo, he will always get the accusation that he cannot do it on the international stage, but look at the clubs he has played for and the trophies he has won as proof as to how good he is.

I'm sure Arsenal fans will not have forgotten him destroying their side for AC Milan at the San Siro in February. That was not a surprise, though, because he has been at the very top for so long now.

He will undoubtedly be Sweden's main threat because he is the man with the best record and most ability in their team but, even so, I don't think England's centre-backs John Terry and Joleon Lescott will fear him.

In fact, I'm backing England to beat the Swedes and then overcome Ukraine in their final group game in Donetsk on 19 June.

Playing the hosts is likely to be the toughest part of that.

As we found out in Euro 96, playing at home makes a big difference. By then, Ukraine will have a good feel for the stadium and their situation - and the crowd will be right up for it as well.

Terry will be up against a player he knows well in that game, his former Chelsea team-mate Andriy Shevchenko.

When I was playing, whether it was the opposing centre-halves or the goalkeeper, I studied who I was up against and what had happened against them before. I made sure I knew their strengths and weaknesses, whether it be pace or ability in the air.

It will be an important battle for Terry and Shevchenko on Friday, but I don't think their knowledge of each other's games will make much difference on this occasion.

None of us saw the best of Shevchenko during his time at Stamford Bridge but he is a different proposition playing for his country.

He is past his best now, of course, and his legs are not what they were but, as he proved with his two goals against Sweden, he is still a force.

Over 20 yards, Terry and Lescott will look after him no problem but Shevchenko still has that sharpness over two or three and he will hurt England if they let him.

We have got our own threat up front too, though.

England will have Wayne Rooney back for the Ukraine game, but before then I am confident Danny Welbeck will impress again against Sweden.

As I said on Match of the Day after England's draw with France, his movement was excellent - he came short to collect the ball and also ran in behind the French defence.

Unlike Ibrahimovic and Shevchenko, Welbeck is yet to score at this tournament but he was our best player on Monday.

There is that old saying that 'strikers are judged on their goals'. But, when you play like Welbeck did, then that shows your value to the team anyway.

Welbeck will have walked off the pitch in Donetsk feeling very good about himself, and so he should. I just hope he has the same feeling after the final whistle in Kiev on Friday.