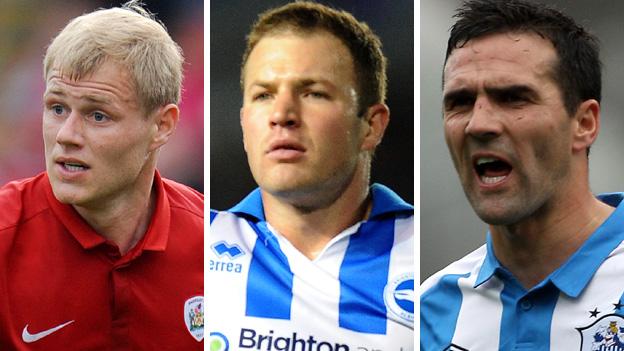 Left-back McEveley, 27, spent two months on loan with Town last season and has now signed a two-year deal following his release by Barnsley.

Navarro, 31, has also committed until the summer of 2014 after being let go by Brighton.

Miller has a wealth of Football League experience, having scored 108 goals in 514 career appearances, and counts Hartlepool, Ipswich, Sunderland and Sheffield Wednesday among his former clubs.

He is the second ex-Terriers player to arrive at the County Ground this week, following the signing of Gary Roberts on Monday.

Navarro had been with Brighton for three seasons and although he made 39 appearances last term, he was deemed surplus to requirements for next season's Championship campaign.

Ex-Blackburn defender McEveley joined Swindon on loan in March after falling out of favour at Barnsley, and decided to make his move permanent after securing a regular first-team spot under Paolo Di Canio.

"I spoke to a few other clubs but I came down here and enjoyed playing for the manager," McEveley told BBC Wiltshire.

"He wasn't going up in to League One just to be another team, he's going in there to do something and I want to be part of it.

"I feel like he can get the best out of me."