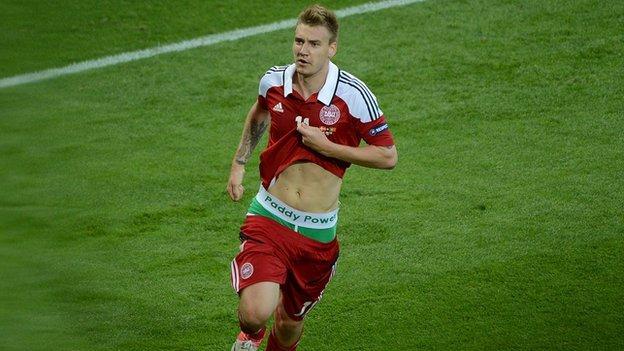 Denmark's Nicklas Bendtner has been banned for one match and fined 100,000 euros (£80,000) by Uefa for his goal celebration against Portugal.

He lowered his shorts to reveal the logo of a betting company on his underpants after scoring the second of his two goals in the 3-2 defeat.

"This suspension applies to the next 2014 Fifa World Cup match for which Bendtner is eligible," said Uefa.

Bendtner has three days in which to appeal.

After the Portugal game on 13 June, the Arsenal striker said: "It is just a pair of lucky boxer shorts that I used in the first game as well and have used before the tournament.

"I didn't know I was breaking any rules but I am aware of that now."