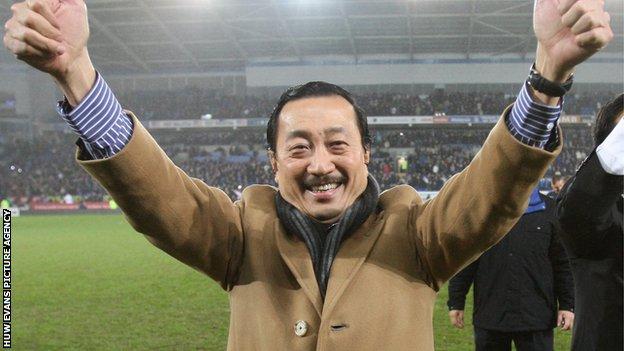 In a statement, owner Tan Sri Vincent Tan said a further £35m would be pumped into the club over the next 12 months, taking the investment to £75.8m.

Around £10m is to be earmarked to settle the outstanding Langston debt.

And £22m will go on training facilities and increasing the stadium capacity.

The announcement comes just days after the Championship club said they were going ahead with plans to rebrand the club, including changing the kit from blue to red and introducing a new badge incorporating a Welsh dragon.

The colour change, which has divided opinion among fans, is part of the investment pledge, with the owners insisting the use of a dragon will expand the club's appeal in "international markets" and "will give this club a new focus and dynamism".

Tan insisted he appreciated the change was "extremely emotional and for some quarters remains difficult to understand".

But he said: "I would like to emphasise that I hold no desire to trample on club history or heritage and would be saddened if supporters thought that this was my intention."

And he added: "There is no reason why any existing supporter needs to feel disenfranchised. This is and always will remain your club."

Cardiff City have missed out on promotion to the Premier League through the play-offs in the last two seasons.

The owners hope the significant cash for squad strengthening will help their bid for top-flight status and end what they say is an operating loss of £1m a month.

In the statement, Tan confirmed: "Cardiff City is expecting a cash injection in the amount of £35m to meet its financial obligations for the period from now until May 2013, including a substantial amount for squad strengthening within budgets.

"Of this amount, £10m has been earmarked to settle the longstanding Langston debt, which if accepted by Langston will go a long way to cleaning up the balance sheet of the club.

"This further £35 million cash injection coupled with my earlier investment of £40.8 million will add up to a very sizeable £75.8 million invested in the club.

"In addition to this, we have budgeted £10 million for the new Premier League standard training facilities and £12 million to increase the stadium capacity by an additional 8,000 seats to 35,000 seats.

"Add this further £22m CAPEX [capital expenditure] and our investment in Cardiff City will have ballooned to £97.8m. With a contingency provision of another £2.2m and our total investment will reach £100m."

Cardiff manager Malky Mackay has already urged the fans to back the revolutionary plans and Tan said he hoped this latest investment would help Cardiff realise their Premier League dream.

"Over the course of the last two years, including some memorable home games and two trips to Wembley Stadium for matches being watched by millions worldwide, I sincerely believe that my investment has not been wasted even though we are still chasing that dream of making it to the Premier League," he said.

"I believe that our club has great potential, but in order to realise that potential real world business and financial decisions need to be made at the appropriate and opportune time."