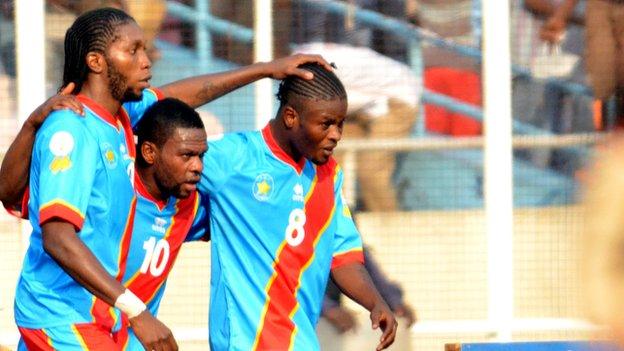 Five teams will reach the third and final round of 2013 Africa Cup of Nations qualifying on Sunday.

Four games are in the balance while DR Congo look all set to go through as they host Seychelles with a 4-0 lead.

After failing to score in this month's World Cup qualifiers, Zimbabwe need to find goals if they are to overturn a 2-1 deficit when hosting Burundi.

The Warriors lost their opening Brazil 2014 qualifier 1-0 at home to Guinea, before drawing 0-0 in Mozambique.

Togo are another team who trail 2-1 from the first leg of these second round ties and host a Kenya side bidding to reach its first Nations Cup since 2004.

Elsewhere, two of Africa's form teams meet in Cotonou as Benin host Ethiopia seek their first goals of the tie.

The Squirrels shot up Fifa's rankings this month, rising over 50 places following their World Cup qualifying defeat of Mali, while Ethiopia surprisingly lead their group.

They opened their Group A campaign with a 1-1 draw in South Africa before beating Central African Republic 2-0, with Said Saladin scoring all Ethiopia's goals.

The competitive matches have greatly assisted the team in their preparations, says Ethiopia coach Sewnet Bishaw.

"The last two World Cup qualifiers have helped us to see what type of players there are (in Africa), but a lack of friendlies means our players do not build up their experience," he told BBC Sport.

"When we played Benin in the first leg, we had not played a friendly beforehand.

"Now we have played very strong matches against Central Africa and South Africa, and we can also draw some lessons from the game against Benin in Addis Ababa.

"I can assure you that my team are now confident about making history - and they want to become the best in Africa."

The final match to be played on Sunday, which will take place in Maputo as Mozambique host Tanzania, is also finely-balanced, with the aggregate score 1-1.

The third and final round of qualifying for the 2013 Nations Cup will take place in September and October.