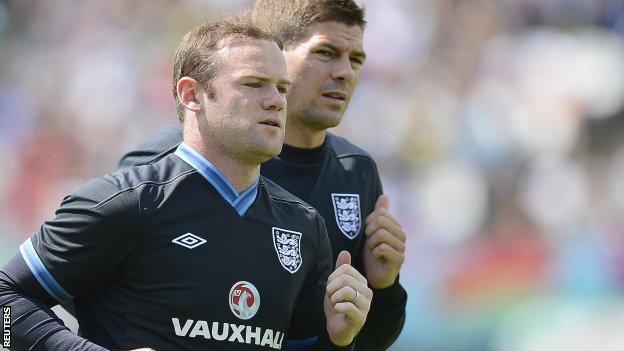 England captain Steven Gerrard believes victory against Sweden will present the perfect stage for Wayne Rooney to return and lift their Euro 2012 campaign to new heights.

Rooney completes a two-match ban after Friday's Kiev clash and will return for the final Group D game against Ukraine.

"Wayne adds an awful lot of quality and skill to this team," said Gerrard.

"If we can get a good win on Friday then get him back fit and raring to go, it is only going to improve things."

"I am sure we will get better and I am sure even just a simple thing like the return of Wayne Rooney will make us into a stronger team and a bigger threat," he said.

"I am sure when opponents play us they would much rather see Rooney's name not on the teamsheet than on it."

Gerrard also believes England will show more ambition against Sweden as they look to move nearer to the tournament's quarter-finals.

Hodgson's side started with a 1-1 draw against France on Monday.

Gerrard, 32, said: "With all respect to Sweden, who are a good, strong team, they're not France so we can be more bold and ambitious and get at them.

"If we perform to the same level we're confident of victory."

Hodgson was "proud" of his side's battling opening to their campaign in Donetsk, but Gerrard believes that the true value of the point earned against France will be shown if England can secure three more points against the Swedes.

The Liverpool man added: "I'm confident and really happy with the start we've made. We've got solid and good platform to build on.

"The boys are confident we can get four points after this next game and that will be a good start to the group."

Gerrard is also sure that England will be ready to deal with the threat of Sweden striker Zlatan Ibrahimovic, who scored in their opening 2-1 defeat by Ukraine.

"He's world-class, on his day very dangerous so we need the same level of commitment defensively to stop him because if we give him time and space he can hurt any team," said Gerrard.

"We're going to be well prepared but he's not the only good player they have. They get dangerous crosses into the box and are a big side so there are a lot more threats than him. But he is a world-class talent."

Meanwhile, Hodgson has dismissed any suggestion that his team were too cautious against France.

And, compared to their tournament opener, the England coach expects his team to have more possession in positions where they can hurt the Swedes.

"I think we always show ambition so I don't think we lacked ambition in the last game," said Hodgson.

"Every game and every team poses a different threat so I'm hoping that we'll have more of the ball in the important areas and pose a lot of questions for the Swedish defence.

"We've got to make certain that when we win the ball back and break out that the last pass is very clinical because it's hard to get good chances at this level. That's something we've been working on consistently."