Apart from the odd flash of his old brilliance, Fernando Torres has endured a torrid 18 months since moving from Liverpool to Chelsea for a British record £50m in January 2011.

Even when the Blues were winning the Champions League, Torres was sitting on the bench suffering what he called one of the worst disappointments of his career.

His misery looked set to continue into the European Championship when Spain opted to go without a recognised striker in their opening game against Italy. When summoned from the bench, 'El Nino' failed to rally the misfiring defending champions in their 1-1 draw with the Azzurri.

However, Vincente del Bosque turned to Torres for Spain's clash with Republic of Ireland and the former Atletico Madrid man repaid his manager's faith.

As the catalyst for a more ruthless and clinical Spanish performance, Torres scored twice in a 4-0 win that sent the Republic out of the tournament.

"Every time David Silva and Andres Iniesta got the ball, they looked to play in Torres. He knows what's coming and he can make the runs with the confidence of knowing he will get the passes. The quality of those two means they can find Torres in any situation.

"He's that willing runner that always looks to get on the shoulder of the back four. He looked so confident this evening, confident in his own ability.

"I felt in the Italy game that, although he didn't finish as he would like, that he looked so dangerous getting behind the Italian back line. He's coming to the fore now.

"He's done his job tonight. He's been key to the way Spain have played. He's been electric in behind the Irish back line."

Torres's effect on Spain in numbers 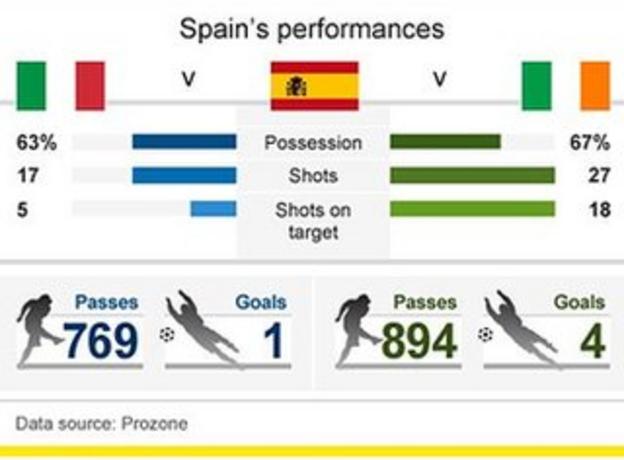 What they said about Torres

"He played the ideal match and those people who thought he could play the first game as well are also partly right." - Spain boss Vincente del Bosque

"You have to enjoy every moment, every game. I started again, scored two goals and enjoyed playing again with my teammates." - Fernando Torres

"For the vast majority of time, we were chasing shadows." - Ireland midfielder Keith Andrews

"Torres showing that there is no future for football without strikers." - Gary Linker on Twitter

"Torres in!! Told you he looked a threat!!" - Robbie Savage on Twitter