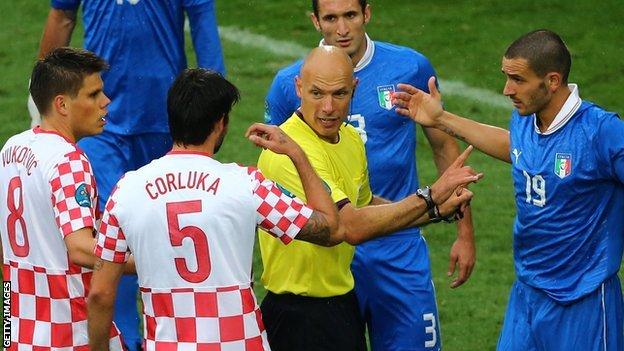 Bilic believes the Yorkshireman should have awarded a penalty to his team when striker Nikica Jelavic clashed with Giorgio Chiellini in the Italian box.

Victory in Poznan would have secured Croatia's passage into the last 16.

"I'm sure that was a clear penalty on Jelavic," said Bilic. "He was a referee who helped the Italian team a lot."

Veteran midfielder Andrea Pirlo, 33, fired Italy ahead shortly before half-time with a 20-yard free-kick, before the Croatians salvaged a point through Mario Mandzukic's 72nd-minute equaliser.

Former Everton and West Ham player Bilic added: "I don't agree with coaches who don't comment on referees. This is very important for my job.

"There was also a foul before the Italy free-kick (from which Pirlo scored).

"I didn't like the referee's performance. He was not good for the Croatian team."

Croatia must beat reigning European champions Spain in Monday's final round of Group C games to be certain of their quarter-final place. But they could still qualify with a draw or defeat, depending on the outcome of Italy's match against Republic of Ireland.

Bilic said: "I'm really satisfied we've got four points from the two games. It could be even better but four points is optimal, realistic and now we have a real chance to go through."

Croatia have qualified for four tournaments since 2000, but the only time they progressed beyond the group stage was Euro 2008.

Meanwhile, Italy coach Cesare Prandelli questioned the fitness levels of his players and their lack of a killer instinct following their second stalemate of the tournament.

The Italians, who drew 1-1 against Spain in their opener, completely controlled the first hour against Croatia before letting their opponents gain a foothold on the match.

"Of course you are a bit bitter because when a side plays football, creates a lot of goalscoring chances, they need to put a game to bed, to kill off the game," said Prandelli.

"You need to be more clinical in front of goal.

"There is a drop in our level at the 60th minute. In terms of the two games, at that stage of the game we lack fresh legs."