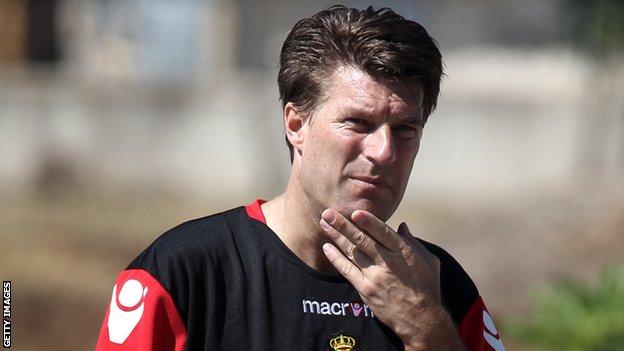 Coleman believes the appointment of Laudrup means the Swans will continue with their attractive playing style.

"From a coaching point of view it's shrewd move from Swansea and from [chairman] Huw Jenkins," said Coleman.

"The name itself [of Laudrup] and the career he had as a player [is impressive enough], but the pedigree he brings you probably can't ask for any more.

"When I think about it how we can attract a name of that calibre to Swansea City it's just amazing when you think about.

"I don't think we can help but learn from someone like that. It's a great appointment.

"As sad as we were to see Brendan go we have to adapt and move on quickly because that is the nature of the game. All the focus now from the players will be with the new manager.

"How far we have come we deserved to be linked with these sort of people. It's obviously a privilege for us to have a high calibre manager but it's also a privilege for him to come and manage this group of players."

"He has done his homework on Michael. He's not going to bring in a manager who is going to change the philosophy."

Laudrup arrives in Swansea having managed four different clubs since 2002. The 48-year-old succeeds Brendan Rodgers at the Liberty Stadium, who was prised away by Liverpool after guiding Swansea to 11th place in their debut Premier League season.

"I hope he [Laudrup] will have the same success as Brendan. I think Michael's style will complement Swansea's style," added Coleman.

"They are not going to want to change that because it has served them well and rightly so.

"It is a very foreign approach the way Swansea City play, a Spanish approach if you like. And I can see why they have gone for Michael."

"The Premier League is the most unforgiving league," said the former Fulham manager.

"It's the toughest league in the world. He will know enough about the Premier League, working in it is another different thing.

"I had to learn that when I was at Fulham, but Michael's pedigree is very good."

Michael Laudrup is a stylish man and the football he wants his teams to play is as elegant as he was as a footballer. Laudrup was that false number nine that paved the way for the position Messi plays. He's very articulate and gets his ideas across very well.

Laudrup comes to the Liberty Stadium having had previous managerial experience at Brondby, Getafe, Spartak Moscow and Real Mallorca.

"They [the Swansea directors] have obviously done their homework as they have on all their managers they have appointed," added Coleman.

"Because they have this philosophy of play right the way through the club which has served them well in the last six or seven years since Roberto Martinez was there.