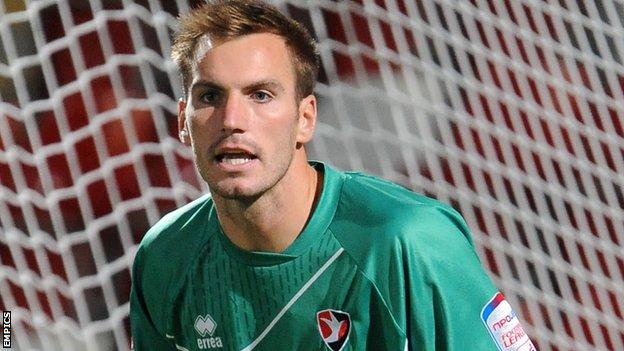 Cheltenham Town goalkeeper Scott Brown has signed a new two-year contract with the League Two side.

The 27-year-old was brought to Whaddon Road by former Robins manager John Ward and has made 179 appearances during his eight-season spell.

"It's always a stressful few weeks after the season's finished, when you get calls from various people," he told BBC Gloucestershire.

"I'm just really pleased to get it all sorted so it's not hanging over me."

Scott Brown is currently studying part-time for a media qualification at Staffordshire University, along with team-mate Alan Bennett.

He played 107 consecutive games but dropped out of the starting XI following the signing of Jack Butland on loan from Birmingham in September.

Teenager Butland, who is now part of England's squad at Euro 2012, impressed during his two spells but Brown recaptured his own form when recalled by Mark Yates and played a major part in Cheltenham securing a sixth-place finish in League Two.

A string of fine saves in the play-off semi-final against Torquay helped the Robins reach the Wembley final, where they eventually lost to Crewe.

"You can go elsewhere and be a number two but I want to play football and Cheltenham is the best place for me to play," he added.

"I want to play 55 games a season and that's something I'm looking to do next season."

Brown joins Steve Elliott and Harry Hooman in committing to a new deal at Cheltenham.