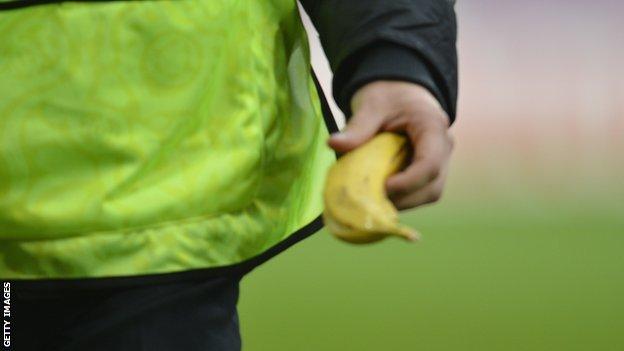 The punishment also relates to the setting off and throwing of fireworks in the Group C match on Thursday.

Croatia have three days to appeal against Uefa's punishment.

Earlier in the tournament they were fined £20,000 after fans threw flares onto the pitch in the 3-1 win over the Republic of Ireland.

A Uefa statement said: "The Croatian Football Federation (HNS) has been fined 80,000 euros for the setting-off and throwing of fireworks, and the improper conduct of supporters (racist chants, racist symbols) at the Uefa Euro 2012 Group C match against Italy in Poznan on Thursday, 14 June."

We are not a racist country and we are angry at these few crazy supporters. We have to put sanctions on these kind of supporters and stop them forever

Fare (Football Against Racism in Europe) announced on Friday that its observers heard between 300 and 500 Croatia fans chanting monkey noises, which prompted Uefa to investigate.

HNS condemned the "deviant" fans who had been involved.

In a statement it said: "The Croatian Football Federation distances itself from all deviant behaviour of the part of the fans during the final tournament of Uefa Euro 2012 and strongly condemns it.

"The HNS, its national team players and members of the technical staff support all Uefa activities aimed at identifying individuals whose behaviour damages the reputation of the competition, no matter which country they come from."

Coach Slaven Bilic also expressed his anger at the incident.

He said: "[Racism] is a big problem all around Europe and all around the world.

"On behalf of the entire nation, not even as a football manager, I want to say that I am really disappointed as a Croatian, a parent, and a sportsman, a person who comes from a modern, open-minded and tolerant state.

"Everyone is welcome in our county. I don't like these kinds of supporters and nor do my players. I don't want them to come into the stadium.

"I live in Croatia and we really are a tolerant county. We are not a racist country and we are angry at these few crazy supporters. We have to put sanctions on these kind of supporters and stop them forever."

Croatia were fined £15,000 by Fifa just under four years ago after England striker Emile Heskey was subjected to monkey chants in a World Cup qualifier in Zagreb.

They were also given a small fine during Euro 2008 for racist abuse from their fans during their game against Turkey.

Alleged racist chanting in the Spain-Italy and Russia-Czech Republic games are already subject to investigations.

A Spanish fans' group has said some of its country's supporters abused striker Balotelli in their game with Italy, while Czech Republic defender Theodor Gebre Selassie told reporters he "noticed" racist chants directed at him.

Balotelli, who started the 1-1 draw against Croatia, said before Euro 2012 that he would "not accept racism at all" and would walk off the pitch if racially abused by fans.