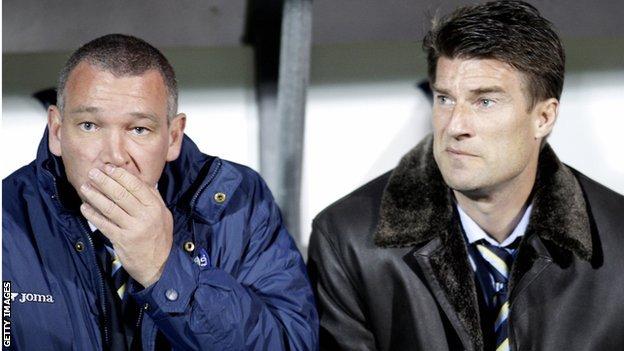 John Jensen has revealed he would consider linking up with Michael Laudrup again to be part of the new Swansea City manager's backroom team.

The ex-Arsenal and Denmark midfielder was Laudrup's assistant at Danish club Brondby and Spanish side Getafe.

The 47-year-old was Steve Kean's assistant at Blackburn Rovers before he left Ewood Park in September 2011 and is "keen" for a Premier League return.

"I would consider it a lot if he asked me to go with him," said Jensen.

"Of course if Michael wants me to come and I have a chance, I will definitely have a thought about it as the best league to work in is the Premier League.

"I tried it at Blackburn and I am quite keen to come back to England and try again."

Jensen, who scored as Denmark beat Germany 2-0 in the 1992 European Championship final, guided Herfolge to the 2000 Danish Superliga title in his first managerial role after retiring from playing.

He joined Laudrup's backroom team at Brondby in 2002 before they both left the Danish club in 2006 and he followed Laudrup to Getafe in 2007.

Both men left the Spanish club after only one season and Jensen was appointed manager of Danish Superliga side Randers in January 2009 - before leaving 10 months later.

Laudrup, the former Real Madrid, Barcelona and Denmark playmaker, signed a two-year contract at the Liberty Stadium on Friday as successor to Brendan Rodgers.

Laudrup completed negotiations with the Premier League club on Friday and the 48-year-old is expected to be unveiled as Swansea boss on Thursday - but he has not yet confirmed his assistants.

Jensen, who understands the British game after spells at Arsenal as a player and Blackburn as a coach, insists he has not been offered a role at Swansea.

"I don't know yet," Jensen admitted to Sky Sports News when asked if he would be Laudrup's assistant at Swansea. "It is quite early days as Michael only signed a contract yesterday [on Friday]."