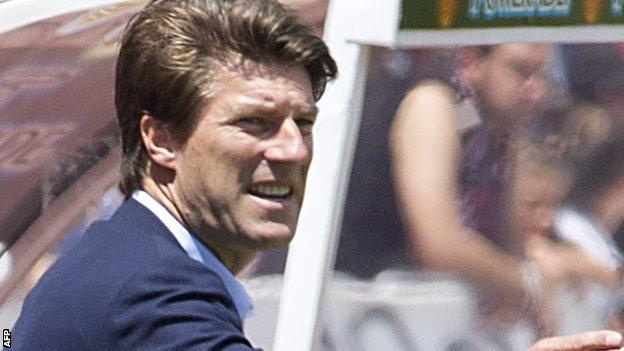 Swansea City captain Garry Monk says the appointment of Michael Laudrup is a mark of the club's progression during the last decade.

Former Barcelona and Denmark star Laudrup has been appointed Swansea's new manager on a two-year contract.

"When I think about the years gone by and now we can attract a name of that calibre to Swansea City it is amazing," said 33-year-old Monk.

Monk joined Swansea in June 2004 when they were in League Two and managed by Kenny Jackett.

Since then the Swans have slowly climbed up the leagues, culminating in their promotion to the Premier League in 2011 and 11th-placed finish in their debut campaign last season.

"The progress we've made, we deserved to be linked with these sort of people," added Monk.

"Hopefully he does really well for us. One thing's for sure, he will have a group of players that are willing to work hard and will give him everything.

"I don't think we can help but learn from someone like that. It's a great appointment."

Laudrup, who has previous managerial experience at Brondby, Getafe, Spartak Moscow and Real Mallorca, is the Welsh club's third manager in the past four years.

And Monk says finding the right candidate to succeed Rodgers and to continue Swansea's playing philosophy was crucial.

"It's probably been the hardest appointment for the club to make," said the defender.

"Out of all the candidates that were linked with the job, he definitely seems to have been the best one and the best appointment we could have made.

"We had massive respect for Brendan but Brendan's gone now and the new manager will get our full respect and attention.

"As sad as we were to see Brendan go, we have to adapt and move on quickly.

"All the focus now from the players will be with the new manager and try and do the best we can."

Monk is well aware of the task facing Laudrup and the players ahead of Swansea's second season in the Premier League, which on Saturday, 18 August.

"We realise it's going to be tougher," Monk added.

"But hopefully we've learnt a lot from last season and we'll improve and take that experience into this season. I can't see anything but progression."