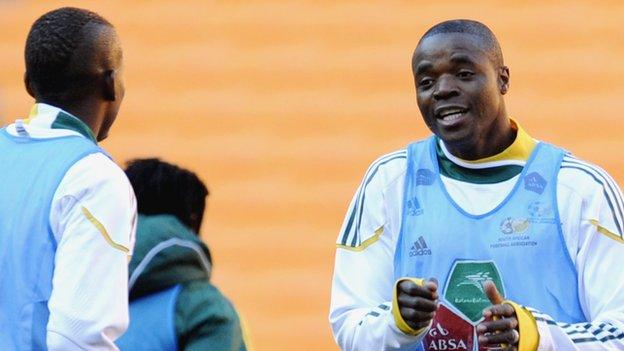 Former South African captain Aaron Mokoena is to sign for PSL side Bidvest Wits, his agent has revealed.

The Portsmouth defender has agreed terms to move back home after spending over 13 years in Europe.

"Various clubs wanted to talk to him but Aaron is very interested in getting back and being part of the exciting project at Wits," said Paul Mitchell.

"Everything is agreed in principle so it's just a matter of sorting things out with Portsmouth."

After arriving from Blackburn Rovers in 2009, the 31-year-old made 19 appearances as the cash-strapped south coast club were relegated from the Championship last season.

Mokoena will follow in the footsteps of his former Bafana team-mate Benni McCarthy by returning to South Africa.

Mitchell admitted the defender, who is Bafana Bafana's most-capped player with 107 appearances, has not given up hope of representing his country again.

"If he gets his head down and starts the new season well then there is no reason why he shouldn't play for Bafana again," Mitchell, who works for Siyavuma Sports, told BBC Sport.

"It's been a problem position for them in the last few matches and Aaron has the experience to still do a job."

During his stay in Europe, Mokoena has played for Ajax Amsterdam and Bayer Leverkusen.