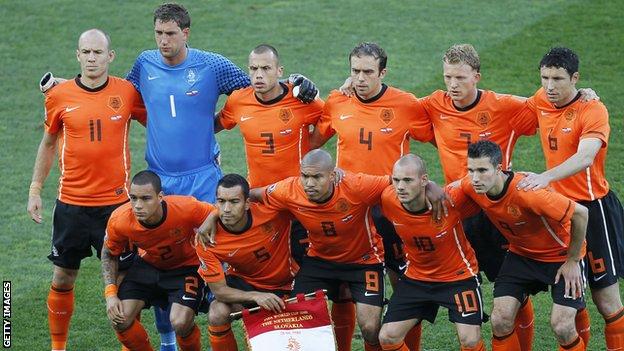 Netherlands skipper Mark van Bommel says team spirit is not a problem ahead of Sunday's must-win Group B match against Portugal in Kharkiv.

Defeats by Denmark and Germany mean the Dutch need three points to stand any chance of clinching a last-eight spot.

"The atmosphere, after two losses, is not as it would be if we'd won twice," said PSV Eindhoven's Van Bommel, 35.

"It's not that we're completely down. We've got a really nice last chance and we're going to take it."

Reports have suggested the disappointing display of the 2010 World Cup finalists in Poland and Ukraine has been down to divisions in the Dutch camp.

The national side famously imploded during a Euro 96 campaign marred by in-fighting among Guus Hiddink's squad.

Netherlands must beat the Portuguese by two clear goals, coupled with a German win against Denmark, to avoid being eliminated in the group phase of a major championship for the first time since Euro 1980.

"We need Germany to win but we know from the start we have to win by two goals and I will keep that in mind," said Dutch boss Bert van Marwijk.

"We have to go for it, that's what the tactics are based on. The tactics will reflect that situation."

The place of veteran midfielder Van Bommel, who was substituted at half-time of Wednesday's 2-1 defeat by Germany, has been heavily scrutinised by the Dutch media.

The ex-AC Milan and Barcelona player sat alongside father-in-law Van Marwijk in a pre-match press conference, leading to suggestions he would definitely start the crucial fixture.

But when asked about his team selection, a spiky Van Marwijk told reporters: "As soon as we begin, you start talking about the first XI. You can make your own conclusions."

Meanwhile, Portugal head coach Paulo Bento knows his side could still go out at the group stage, even if they beat the Dutch, after taking three points from their opening two games.

But skipper Cristiano Ronaldo and his team-mates could also lose by one goal and go through to the last eight.

"We will fight to the very last minute to achieve our goals," said Bento. "I am always very optimistic.

"If I didn't believe in the possibilities to succeed, I wouldn't be here. We believe in a great result."