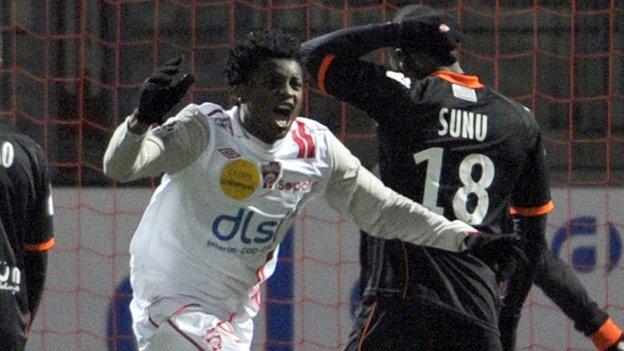 Cameroon's Indomitable Lions made hard work of beating Guinea-Bissau 1-0 in a 2013 Africa Cup of Nations qualifier.

Cameroon had to wait until the 80th minute before Benjamin Moukandjo finally broke the deadlock against a team ranked 169th in the world.

Fans in Yaounde chanted for the suspended Samuel Eto'o as his replacements missed a host of chances.

Denis Lavagne's side had wanted an improved display after losing to Libya in last week's World Cup qualifier.

Nonetheless, the unimpressive 1-0 win enabled the Indomitable Lions to qualify as 2-0 aggregate winners.

On Saturday, the Super Eagles beat Rwanda 2-0 at home to qualify by the same aggregate scoreline.

Ikechukwu Uche opened the scoring early on but a laboured Nigeria had to wait until the 56th minute before Ahmed Musa wrapped up the win.

A score draw would have taken Rwanda into the third and final round of qualifying but the closest they came to scoring was when Meddie Kagere headed against the bar in the dying moments.

Two of the most dramatic games came in Malawi and Uganda, where both sides overturned first-leg deficits to win through.

The Flames beat Chad 2-0 to qualify as 4-3 aggregate winners.

John Banda netted from a goalmouth scramble in the first half before Joseph Kamwendo - who had missed a penalty when the game was goalless - fired home a screamer from 30 yards late on.

Kinnah Phiri says beating Chad is a relief to the Coach after The Flames won their first game in 2012 and with it a place in the next round of the Africa Cup of Nations qualifiers.

"This is the first time we have played Chad and they have not scored a goal," Malawi coach Kinnah Phiri told BBC Sport.

"My technical discipline was very good. I used two strikers who were very good and composed, but we worked very hard throughout the week to make sure we got these goals."

In Kampala, Uganda started the day trailing Congo 3-1 but they recorded a comprehensive 4-0 victory to qualify in eventual comfort.

Elsewhere, Sierra Leone beat Sao Tome 4-2 to overturn their shock 2-1 defeat against the islanders in the first leg in February.

Details of the match were in short supply after local journalists boycotted the game in protest at being asked by the sports ministry to pay to be able to cover the game.

Liberia and Cape Verde were the last teams to make it through.

The Lone Star drew 0-0 in Namibia to squeeze through as 1-0 aggregate winners thanks to their slender victory in the first leg.

Cape Verde were the last team to play and they won 3-1 at home against Madagascar to qualify as 7-1 aggregate victors.

On Friday, Algeria became the first team to reach the third and final qualifying round - which gets underway in September - and another five teams will make it through on Sunday.