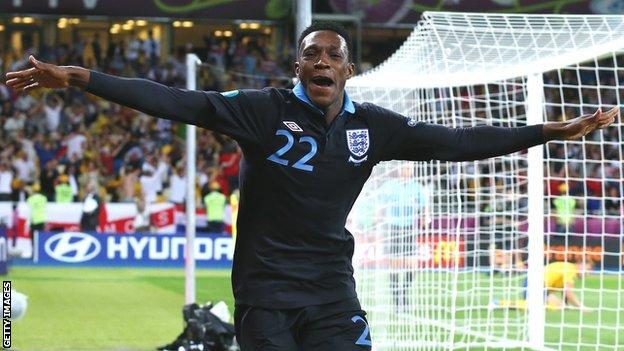 England boss Roy Hodgson has warned against expecting too much from Danny Welbeck, despite the Manchester United striker's positive impact at Euro 2012.

The 21-year-old scored a superb goal in Friday's 3-2 win over Sweden in Kiev.

"I would do well to encourage you not to put too much pressure on the lad," said Hodgson as England prepared to face Ukraine on Tuesday.

"Before we build him up to the skies to knock him down, we should remember he has a lot of time ahead of him.

Hodgson added: "I am happy with the progress he is making. The fact is he has broken into a team like Manchester United, then got games in the national team when he could still play for the Under-21s.

"He had a wonderful season with Manchester United and Sir Alex [Ferguson, United boss] has high hopes for him."

Welbeck is expected to retain his place for England's final Group D game against the co-hosts, and he is likely to partner club team-mate Wayne Rooney, who returns from a two-game suspension.

The pair struck up an impressive partnership during the 2011-12 season, scoring 30 goals between them on the 18 occasions they started together.

This could persuade Hodgson to select Welbeck ahead of another England's goalscorers against Sweden, Andy Carroll.

But it is also apparent that Hodgson does not want to put too much pressure on Welbeck while he is still developing.

"With the quality of players we have, hopefully I will be able to use him in the same way Sir Alex has done at United - sparingly, from time to time," said Hodgson.

Meanwhile, substitute hero from the Sweden game Theo Walcott has hit back at suggestions that he has not developed since scoring a stunning hat-trick against Croatia four years ago in a 2010 World Cup qualifier in Zagreb.

Walcott admitted there is a lot more to come from him six years after becoming England's youngest ever player at 17 years and 75 days.

However, the Arsenal man made an impression in his first taste of tournament football as he scored a second-half equaliser before setting up Welbeck for his winner against Sweden.

"People say I've not kicked on but, being only 23 and with 26 caps under my belt, I'd say it has not been too bad from my point of view," Walcott said.

"There is still a lot to come but at 23 I'm getting a bit more experienced and I'm featuring in this tournament as well.

"Hopefully there will be a lot more to come from me and I can keep clocking those caps up.

"The goals will always come. I've always had that. This season just gone, I've scored goals and had assists and that's what it is about as a winger. You are always judged on your stats like that."

The former Southampton man's display has now put him in contention for a starting place against Ukraine on Tuesday.

England have four points in Group D and are second behind France on goal difference, with Ukraine a point further back. Sweden, who lost against Ukraine in their opening game have already been eliminated.

Hodgson's men need a point to book their place in the last eight.