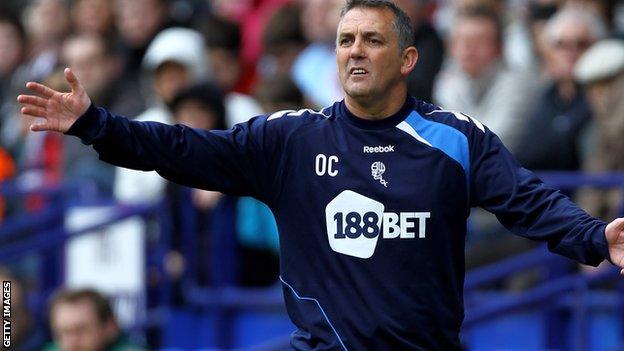 Coyle moved from Burnley to Bolton in January 2010, with the Turf Moor club relegated a few months later.

Bolton's 11-year stay in the Premier League came to end when they could only draw with Stoke on the final day of the last campaign.

Blackburn start their season away to Ipswich, while Wolves play Leeds United at Elland Road.

Rovers and Terriers back again

The three sides promoted from League One are also all away on the first day of 2012-13.

Charlton Athletic will go to St Andrews to play Birmingham City, Derby will host Sheffield Wednesday while Huddersfield Town, who went up via the play-offs, travel to Cardiff City, who will be wearing their controversial new red home kit.

Blackpool, who missed out on promotion after losing the play-off final to West Ham, start their season away to Millwall while Steve Bruce's Hull City are at home to Brighton for their opening game.

Nottingham Forest and Bristol City, who both finished last season just above the relegation zone, face each other at the City Ground.

Peterborough, one place above Forest at the end of the last season, are away at Leicester and Crystal Palace host Watford.

The first visitors to Bolton will be Derby County, Blackburn's home campaign starts when they play Hull City in their second fixture, while Wolves will host Barnsley for their first home game.

The first meeting between two of the former Premier League sides is scheduled for 6 October when Blackburn play Wolves at Ewood Park. Bolton travel to Molineux on 23 October.

The Blackburn v Bolton local derby at Ewood Park has been pencilled in for 28 November.

The new season's fixtures are preceded by the first round of the League Cup, which was drawn last week and will take place in the week beginning 13 August.