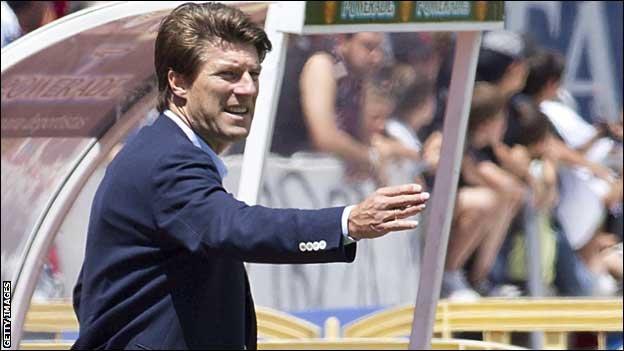 The new Swans manager will travel to Loftus Road on Saturday, 18 August before his first home game against newly-promoted West Ham a week later.

Former manager Brendan Rodgers returns to the Liberty Stadium with his new Liverpool side on 24 November before the return at Anfield on 23 February.

Swansea have a tough run-in against against three Champions League teams.

The Welsh club will welcome another former boss Roberto Martinez when his Wigan Athletic side visit the Liberty Stadium on 20 October.

Swansea's return fixture with Wigan is on 13 April is in the middle of a tricky run-in as the club hope to secure survival in the top-flight.

Swansea chairman Huw Jenkins admitted: "We look forward to the new season with excitement tinged with apprehension of a new season with a new manager as we're praying that it will work out well.

"But even if Brendan was still with us, at this level of football you've no guarantees year on year what season you have in front of you.

"We all know we're in the toughest league of all and this year, with three promoted sides who will be very competitive spending money bringing players in, and it will be one the toughest Premier Leagues seasons for a long while.

"It will be a massive challenge for us all and we'll start off with the thought that we will just do our best, compete and enjoy it and at the end of the year hopefully we'll still be in the Premier League."