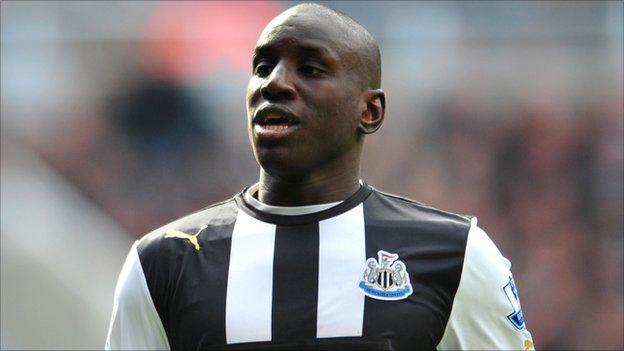 Manager Alan Pardew says Newcastle United are hopeful of keeping Demba Ba despite continuing interest in the Senegalese striker from other clubs.

Ba, 27, has been a reported target of Tottenham Hotspur, while last week a social networking site fuelled a rumour of a move to Turkish club Galatasaray.

"Ever since he signed with us we've had it, I don't think it's going to go away," Pardew told BBC Newcastle.

"We want him to stay, the fans do too, and we hope that will be the case."

Pardew is keen to have the forward, who joined the Magpies little over a year ago and scored 17 goals last season, in his squad when the Magpies kick off the new Premier League campaign against Tottenham on 18 August.

That fixture is followed by a trip to Champions League winners Chelsea, while a visit to Everton and a home clash with Manchester United are also within the first seven games.

Last season Pardew's side started with the visit of Arsenal but it was not until 19 November that another top-six side provided the opposition.

"It's significantly tougher, we had a softer start than most last season," Pardew said.

"This year we're in at the deep end, pre-season it will be important we're up to speed for the first game.

"It shows the demands of the Premier League, with two tough games. But on the back of last year we're hoping to get positive results in those two games."