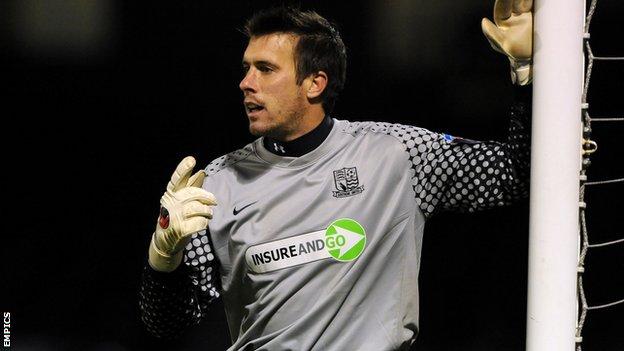 The 30-year-old, who was at non-league Staines Town last season, will be cover for first-choice keeper Artur Krysiak.

"He's an experienced goalkeeper, the opportunity was there for us to sign him because he had a year out of the league," said boss Paul Tisdale.

Evans has vast experience of League football, having played more than 275 senior games in the past 12 years.

He began his career as a trainee at Chelsea and made his debut on loan at Bristol Rovers in February 2000.

His most successful period came when he was at Swindon Town between 2003 and 2006 where he played more than 120 games before moving on to Blackpool on a free transfer.

He played 13 times for Southend United before being released before the start of last season.

"He was desperate to get back in to League football and the opportunity was there for us," Tisdale added to BBC Sport.

"There seems to be a nice balance between him and Artur and it's someone that I have no problems playing in the first team should he earn it or there be an opportunity."

And despite coming in as cover for Krysiak, Tisdale says Evans will have the chance to play in League Two if he impresses.

"At the moment Artur is number one, he's in possession of the shirt.

"Rhys comes into the squad and he's not coming in to start the season, but it's not the case of Artur staying all season long.

"I need someone who's capable of going in and staying in and not just being available should Artur not play well, but be ready to out-perform Artur and earn a place in the side through performance."