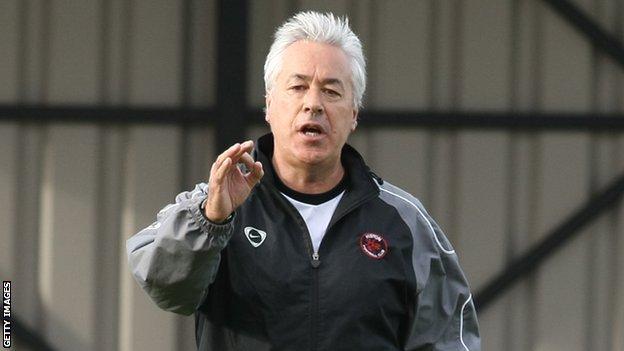 Kettering Town have named John Beck as their new manager on a two-year deal.

The 58-year-old has taken over from Ashley Westwood ahead of next season's Evo-Stik Southern Premier campaign.

Beck told BBC Northampton: "I always had a dream to be involved at a club from ground level - and we are starting from scratch here.

"At every club I was at, it took 18 months to get the squad together. We might not have the squad we want straight away."

Beck, who will have former Crewe Alexandra goalkeeper Dean Greygoose as his assistant, added: "I have only one thought in my mind - promotion.

"We will get into the Football League with this set-up."

We will get into the Football League with this set-up

Acting-chairman George Rolls had been hoping to sign Long Buckby's Dan Quigley but he is understood to have joined King's Lynn Town instead.

Former Torquay United central defender Ed Palmer is understood to be arriving at Nene Park, however.

"The priority is to hold trials and to ring the players I've got in mind," said Beck.

"Hopefully, in a couple of weeks, we'll have some foundation of a squad.

"I can guarantee that they'll be the fittest and most organised. We want to try to play fast, furious, attractive, attacking football.

"We haven't got much time to build that and I hope the fans are patient. But it's very exciting for me."

Beck has also managed Preston, Lincoln City and Histon, having played nearly 500 times for clubs including Fulham, Bournemouth and Cambridge.

He enjoyed his greatest management successes with the U's, leading them from the Fourth Division to the Second Division play-offs in 1991-92.

Greygoose, meanwhile, spent the last 18 months as the assistant manager at Ely City but was involved with Beck at Histon in 2010.

"The facilities are second to none and there's a good fanbase," he told BBC Northampton.

"There's a pressure on us to do well but that makes you perform. Histon was even tougher - this is set up to be successful.

"Kettering are a big club and we need to get them back to where they should be. If that means starting again and getting rid of the deadwood, getting people in that are hungry and will give everything, that's what we need to do."

The Poppies have recently had a company voluntary arrangement approved by creditors, and have been confirmed a place in the Southern Premier for 2012/13, albeit with a ten-point deduction.