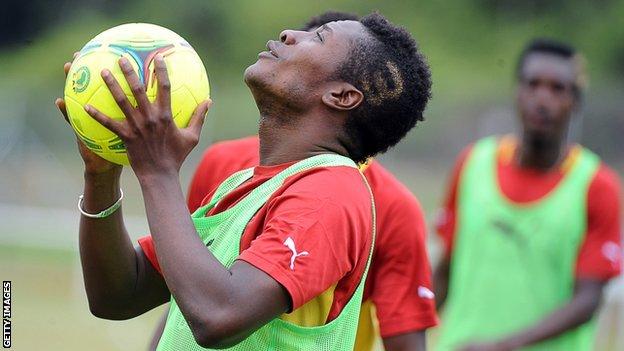 Ghana's Asamoah Gyan appears to have ruled out a return to English Premier League club Sunderland.

Gyan has completed an initial one-year loan deal from Sunderland at Abu Dhabi club Al Ain, and says negotiations are ongoing to extend the deal.

The 27-year-old striker has told a radio station in Ghana that at the moment he is only "thinking of Al Ain".

"We are still in negotiations so hopefully I might stay at Al Ain," Gyan said.

"I have done a great job. Definitely people will like me to stay. Personally I am also happy over there."

Gyan, whose willingness to stay swap the English Premier League for the United Arab Emirates was criticised as a poor sporting move, says he has had interest from other clubs.

"When you do well, definitely clubs will come after you. For now I am thinking of Al Ain, only Al Ain, so let's see what happens.

"I am still young and I still I have a lot of years ahead."

Gyan is currently on a break from international football and despite the Ghana Football Association saying his return to the Black Stars was imminent he did not play in either of their 2014 World Cup qualifiers earlier this month.

They appeared to cope well without him for their opening qualifier as they thrashed visiting Lesotho 7-0 but they then lost 1-0 to the African champions Zambia a week later.