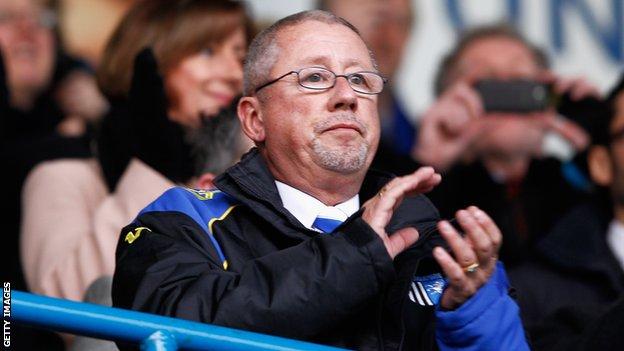 Gillingham chairman Paul Scally says the club will take their time over the appointment of a new manager.

The League Two side are without a boss after Andy Hessenthaler moved into the role of director of football in May.

Scally told BBC Radio Kent: "We've seen a number of very good candidates, got a few more to see and have some second interviews to do.

"I'm under no pressure time-wise, other than the fact we'd like a manager in place by the start of pre-season."

The club's players report back to begin their pre-season training on Thursday, 5 July.

Scally added: "There's no rush. I know fans may be frustrated but it's important we look at all opportunities and combinations.

"We didn't employ Peter Taylor [in 1999] until the day before pre-season and we got promoted that season, so there's no pressure.

"Ideally, we want someone in before 5 July but the manager wouldn't be doing much before that period."

Scally admits that a culmination of factors have complicated the Kent side's search for a successor to Hessenthaler.

"It's a time consuming process and unfortunately I've been hit by three problems," Scally continued.

"A lot of the managers I've received applications from have been away so actually seeing them has been difficult.

"The second problem is the vice-chairman, who was going to be involved in the process, had a heart problem and has been in hospital for two or three weeks.

"And the other director involved has been in America. I've been keeping them informed as best I can."