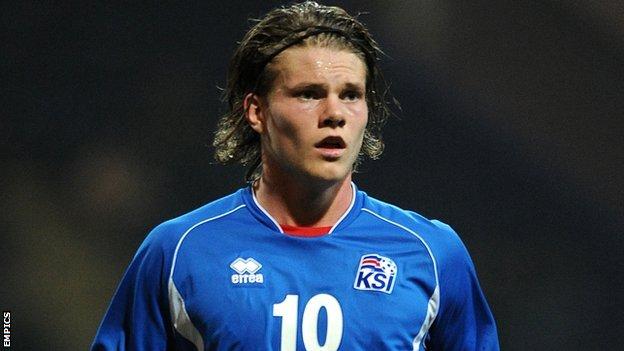 New Wolves manager Stale Solbakken has lined up his first signing by agreeing to sign striker Bjorn Sigurdarson from Norwegian side Lillestrom.

The 21-year-old Iceland international, a half-brother of ex-Wolves midfielder Joey Gudjonsson, is yet to agree personal terms on a four-year deal.

He has three Norwegian Premier League games to fulfil for Lillestrom.

But assuming there are no hitches and he passes a medical, he is due to sign on 13 July for an undisclosed fee.

"Negotiations have been slightly more complex than usual due to the Norwegian league being halfway through the season," said Wolves chief executive Jez Moxey.

"But, as a result of extensive discussions, we now have an agreement.

"Bjorn is a young and exciting striker and has been very keen to join us, particularly to work with our new manager Stale Solbakken."

Sigurdarson, who made his senior international debut for Iceland against Cyprus last September, has been in good form in Norway this season with seven goals in 11 appearances.

"He is an exciting young prospect who has the quality to help us achieve our aims both in the short and long term," added Solbakken.

Sigurdarson is not the only Icelandic international on Wolves' books, utility man Eggert Jonsson having signed from Hearts for a reported £600,000 in January.

He will be the fourth Icelander to play for Wolves, who have not enjoyed a great deal of joy with players from the Nordic countries in the past.

But they will hope their luck changes now they have a Scandinavian in charge.

Wolves' options up front next season might change if Steven Fletcher, reportedly a target for Sunderland, moves on.