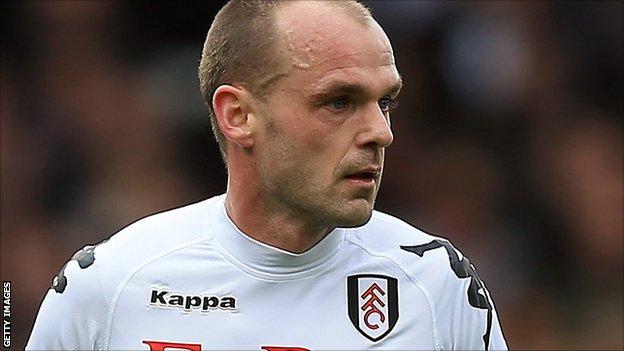 The 35-year-old midfielder left Fulham at the end of last season after five years at Craven Cottage.

He becomes as Rovers prepare for their first season in the second tier for 11 years.

His record is there for all to see. This is a pivotal signing for us

"His [Kean's] desire to get me to the club was a huge factor in my decision to join," Murphy told the club website.

"When meeting Steve Kean, I soon realised the passion, enthusiasm and ambition he has for the club and how much he wants the team to bounce straight back up to the Premier League.

"The owners were also very passionate about their desire to move Blackburn forward as a club and create a squad that is able to achieve promotion.

"I'm excited about my new challenge and can't wait to get started.

"I have enjoyed a fantastic five years at Fulham and I'd like to thank the club and the fans for all their support. Now, my new challenge is to help Blackburn get promoted and repay the manager's and the owners' faith in me."

Murphy brings a wealth of experience to Ewood Park, having played more than 700 professional matches.

He began his career with Crewe Alexandra before joining Liverpool in 1997. He spent seven years at Anfield and was part of the squad that won the FA Cup, League Cup and Uefa Cup in 2001, as well as helping the Reds into the Champions League for the first time.

It was during his time with Liverpool that he earned all nine of his full England caps.

An 18-month spell with Charlton Athletic followed, before he left The Valley to join Tottenham Hotspur in January 2006.

But he made just seven Premier League starts during his time at White Hart Lane and moved across London to Fulham, where he enjoyed much greater success, the highlight being their run to the Europa League final in 2010.

He also scored the winning goal at Portsmouth on the final day of the 2007-08 season, a victory that kept Roy Hodgson's Fulham in the top flight.

Kean added: "Being able to bring Danny on board is a massive boost for everyone and I couldn't be more delighted.

"His record is there for all to see. He is a model professional, who has a real hunger to keep on playing football and we are thrilled he has decided to commit his future to us.

"This is a pivotal signing for us."