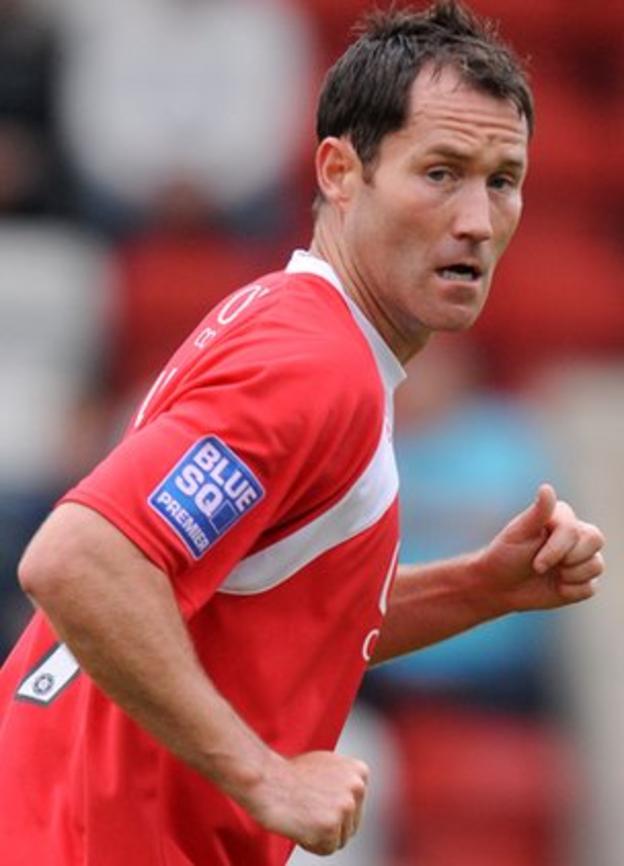 The much-travelled 36-year-old veteran had considered retirement after knocking in well over 100 career goals during his 19-year pro career.

But boss Steve Burr, who has also lined up Ebbsfleet striker Ricky Shakes, has persuaded Guinan that he is still young and fit enough to carry on.

"Just because he is in his mid-30s now doesn't discount him," Guinan told BBC Hereford and Worcester.

"Age has never bothered me because I think if somebody has still got something to offer to the squad, I'll try to do my best to keep them.

"I have explained to him that I am going to be looking to the younger ones as the starters and he has no problem with that."

Guinan netted seven times in 38 games for Harriers last season after being released by Northampton Town.

And his presence also had a positive effect on the likes of Anthony Malbon and Marvin Jackson following their step-up from lower-grade football.

I am resigned to losing Ricky Shakes to Kidderminster Harriers, for footballing reasons

"He played a big part for us last year helping the younger ones in the side," added Burr. "And he has experience that it's good to have around the dressing room."

As for Harriers' interest in Shakes, who scored seven times in 41 games for Ebbsfleet last season, his move to the Midlands appears to be set to happen sooner rather than later.

"After a meeting with Ricky last week it was clear that the offer of full-time football at Kidderminster and a new challenge was behind his thinking."

The 27-year-old, who started his career at Bolton, has had Football League experience with Bristol Rovers, Bury, Swindon Town and Brentford.