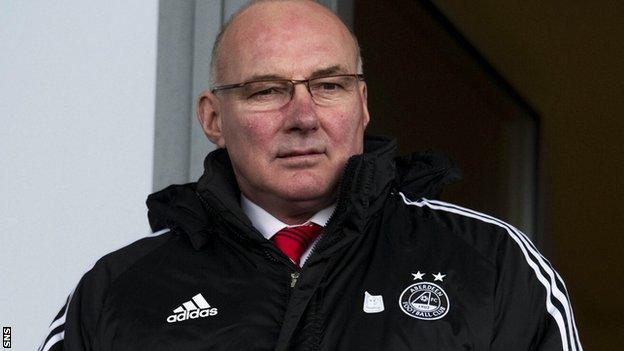 Aberdeen is severing all ties with club legend Willie Miller after announcing a major boardroom shake-up.

Former captain and manager Miller, 57, is leaving the board, along with four other directors.

And he is losing his director of football development position, having been switched to the role last year.

"The news has come as a surprise to him and he was obviously disappointed," Aberdeen chairman Stewart Milne told BBC Scotland.

"He is no longer part of the board and his current post is being made redundant.

Nobody appreciates more than I do what Willie has contributed. He has played a huge part in lifting our youth development up to another level.

"We are in discussions with Willie at the moment."

Miller spent his entire playing career as a defender with Aberdeen from 1972-1990, featuring in over 550 matches for the club and earning 65 caps for Scotland.

He won three league championship titles, four Scottish Cups and three League Cups - but his crowning achievement was captaining the Dons to win the European Cup Winner's Cup in 1983 which was followed by the European Super Cup.

In 2003, Miller was voted the greatest Aberdeen player of all time in a poll to mark the club's centenary, and he was an inaugural inductee to the Scottish Football Hall of Fame in 2004.

He was appointed Aberdeen manager in 1992, replacing Alex Smith, and, despite finishing second in the league in two seasons - along with reaching two cup finals - he was sacked in February 1995.

"Nobody appreciates more than I do what Willie has contributed," added Milne.

"He has played a huge part in lifting our youth development up to another level.

"We just felt this was the right time to be making a break."