It was Napoleon who maintained he promoted his generals not on their greatness in battle but because they had luck.

It would be unfair to portray Roy Hodgson's side as such, but if their progress to the quarter-finals of Euro 2012 has shown us anything it is that the tide of good fortune may finally be turning in England's favour.

"Arguably, the French were better, the Swedes were better and Ukraine were better. But somehow it is England who have won the group."

The giddy expectation synonymous with tournaments past has been absent in Poland and Ukraine.

In the build-up to Sunday's last-eight encounter with Italy, there may be a temptation to revert to the historic mood of optimism that has swept the nation along in the past. Those watching carefully are likely to be more circumspect, and Hodgson and his players will not be getting carried away.

"Of course it was a slice of luck," Hodgson said. "We as England have suffered with bad luck against Portugal and against Germany in big matches in the past. Perhaps it was important today that if there was going to be luck, we got it."

Against Ukraine in Donetsk, lady luck was wearing white.

Even leaving aside the inexplicable decision not to award Ukraine a goal when Marko Devic's shot clearly crossed the line, there were examples all over the Donbass Arena - not least in the goal that gave England victory, when Ukraine goalkeeper Andriy Pyatov spilled Steven Gerrard's low cross, allowing Wayne Rooney to head in from a yard.

And yet the overriding sense at the final whistle was that England had earned it.

So many times in the past these moments have gone against England at key moments: Frank Lampard's goal that never was against Germany in the 2010 World Cup, Paul Gascoigne's outstretched toe at Euro 96 and Sol Campbell's disallowed goal against Argentina in 1998. And all this before anyone mentions the words "penalty shootout".

"To be successful in these tournaments you need a bit of luck," Gerrard said.

"Two years ago we didn't get the luck with Frank Lampard's shot against Germany. We had to pack our bags and go home. But if you keep fighting you earn your luck and we have done that with our performances in the group." 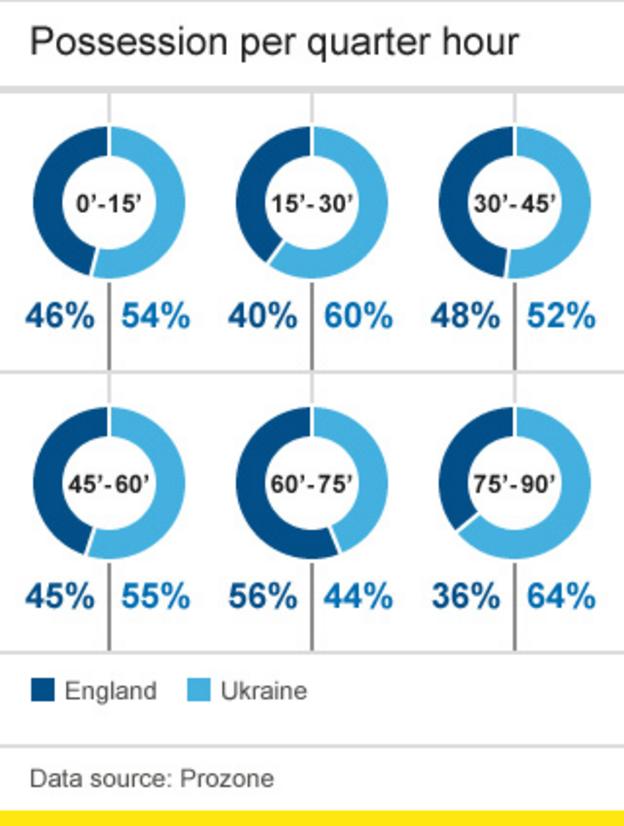 The critics were in agreement. England may not have impressed but results are all that matters. "Arguably, the French were better, the Swedes were better, Ukraine were better. But England have won the group. That's football, it's crazy but that is why we love it." That was how BBC Radio 5 live's Alan Green saw it.

"In tournament football you need good fortune, and England have had that. If we hadn't, another team would have. Ukraine were so much in control of the game, but they didn't have an end product."

"I am a living, breathing example of England managers who might not have had the breaks and you need them to succeed at this level - it is about time England got some of that."

But there is more to this England side than simply good fortune.

Hodgson deserves credit for turning a mood of diligence and determination among his players into something far more meaningful over the past fortnight or so.

Too often in the past England have proved less than the sum of their parts. This time many of them are performing beyond their individual abilities to work more successfully and more cohesively than they have for a long time.

In a team game, a commitment to the collective should be a given. For England, that has not always been the case.

Under Hodgson, England have found a new sense of unity, purpose and spirit and it is helping to bridge the gap to those teams with greater technical ability.

Few would dispute England lack the star quality of Spain, Germany or even Portugal but Hodgson is making a success of this campaign through the most British of qualities, organisation, hard work and sheer bloody-mindedness.

And that against the backdrop of a spate of injuries and a squad widely regarded as one of England's weakest in recent times.

"All we seem to do is talk about expectations," Hodgson said.

"It is not a question of expectations, it is about keeping going and enjoying this tournament. Who knows where it will take us?"

Hodgson is not the type of manager synonymous with the boom and bust of England's hopes past. The small improvements that have been on show in Euro 2012 have not been a product of tub-thumbing or inspirational man-management, but of endless drills on the training field.

Concentration first, perspiration second - and inspiration as a bonus.

England are not a team set up to thrill but instead to make a virtue of caution and restraint. Italy have adopted a similar approach which may not bode well for those hoping for fireworks when the teams meet in Kiev on Sunday.

In all three games England have been outpassed and, at times, outclassed, but as Hodgson said himself, this is not something that is likely to change. "Tournaments are won by teams who are organised, together and committed to the cause," he said.

"Teams that haven't been fancied at all at the start have used those qualities to win tournaments."

Hodgson's England deservedly march on. On the back of England's best performance in a European Championship group stage since 1996, the squad is relaxed, confident and willing to go the extra yard for Hodgson.

Fortune favours the brave. If the England manager can keep luck on his side, who knows where the journey will end?