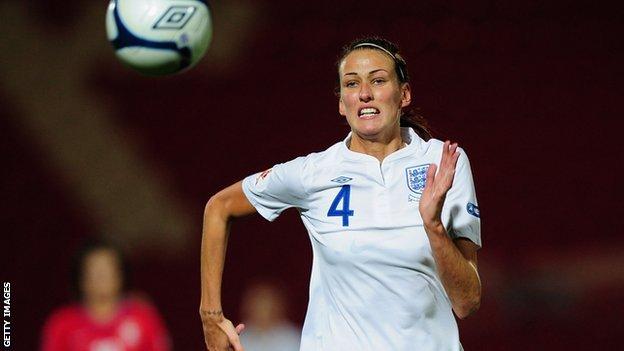 Everton midfielder Jill Scott was on target twice as England beat Slovenia 4-0 in their Women's Euro 2013 qualifier to close in on a place at the finals in Sweden.

England must now win their last group match, at home to Croatia in September, to clinch top spot in Group Six and secure the only automatic qualification place.

But having beaten the bottom-of-the-group Croatians 6-0 away, that should not prove too arduous a task for Hope Powell's team.

National coach Powell said: "We just have to make sure we finish the job now and we'll approach the last game like we did this one.

"We went about it in a professional manner, and although we took a little time to get ourselves in front we knew the goals would come.

"It was just a matter of time and once the first one went in we settled - in the end we could have won by a much wider margin."

England should have been ahead well before Jill Scott's 29th minute opener.

And three minutes later the unmarked Fara Williams missed the target from 10 yards after being set up by striker Eni Aluko.

Scott sent an 18-yard effort narrowly over the bar in the 18th minute but then made the breakthrough 11 minutes later.

The Slovenian defence failed to deal with a Rachel Yankey corner and Scott, eight yards from goal, poked the ball under goalkeeper Sonja Cevnik.

England eased off after taking the lead and almost paid the price in the 38th minute, when midfielder Anita Asante had to clear striker Andreja Niki's header off the line.

But any nerves that might have set in were dispelled when Scott collected Aluko's 43rd minute pass to score her second goal with a precise 18-yard shot.