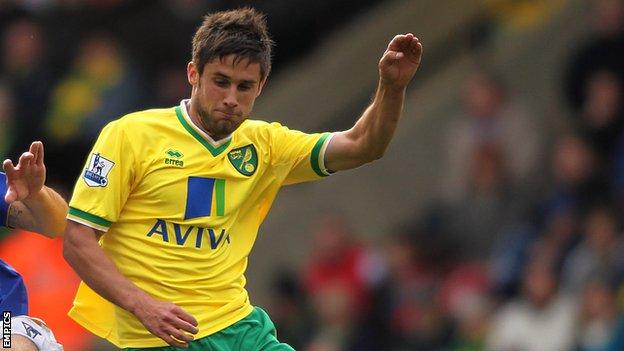 The 25-year-old, who had 12 months left on his deal, scored four times in 25 Premier League appearances last season.

"I think this has been the best season of my career. It was my second in the Premier League and it has been great," he told the club website.

"I think everyone has enjoyed it, and it's exciting to see what is going to happen next season now."

Former boss Paul Lambert bought the South African-born wideman in the summer of 2010.

His first six months in Norfolk were hindered by separate knee injuries but he has gone on to make 49 appearances for the Canaries and hopes to win over new manager Chris Hughton.

"Everyone has a point to prove whenever a new manager comes into a club, everyone will be on a level playing field again," he said.

"You've got to keep proving yourself, and that's what's going to happen this season. Pre-season will be an important part of that - we've got some tough fixtures.

"The new manager coming in will give everyone a boost ahead of the new season. I'm sure that will help because everyone wants to be playing and that can only be good for the team.

"Everything I've heard about the new manager is really good.

"He's a football man, and a good man manager too. I haven't met him just yet, but I'm looking forward to it as all the lads are. It's going to be an exciting time next season."

Hughton added: "Since joining from Wolves he has continued to improve, and showed this by scoring some important goals in the Premier League last season.

"It's a deal that is well-deserved, and hopefully he can pick up where he left off when we get back for pre-season."