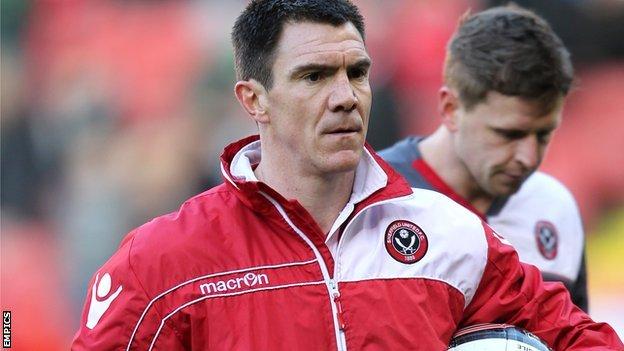 Morgan, 34, did not make a first-team appearance last season because of injury and instead coached the club's reserve side.

"It's unlikely he'll start again. He's away doing his coaching badges and then I think he'll consider what he wants to do when he comes back," said Wilson.

"We'd like to keep him involved with us, there's no doubt about that."

"He's making his impact off the pitch now and you can't be super human and go on forever."

It could well be that there are a lot of changes, not out of choice, but it could be that way

Morgan has made 247 league appearances for the Blades since joining the club from Barnsley in 2003 but has not featured in the starting XI since the end of October 2010.

Meanwhile, the United manager conceded the playing squad could undergo a major overhaul this summer.

The Bramall Lane club lost to Huddersfield Town in the League One play-off final in May and have released 11 players.

"It could well be that there are a lot of changes, not out of choice, but it could be that way," he told BBC Radio Sheffield.

"In an ideal world we'd keep most of the squad together but it's not likely that will happen.

"We have budgets and we'll need to look at them to see who we can bring in, if anybody."

Wilson is hopeful of keeping out of contract duo Lee Williamson and Kevin McDonald at the club but is not setting a deadline for them to agree new deals.