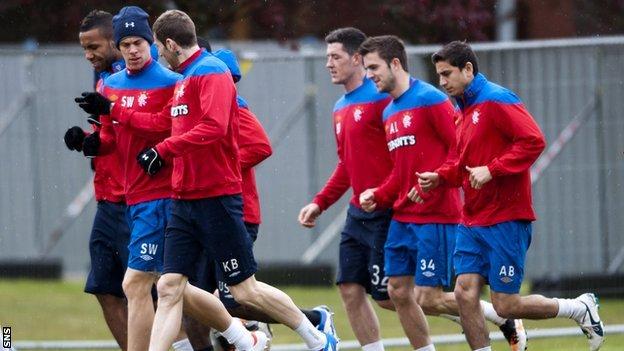 Manager Ally McCoist and chief executive Charles Green will meet with members of the Rangers playing squad next week to discuss their futures.

Green's consortium moved the club's assets to a new firm and it believes player contracts can also be switched.

Green said: "Alistair and I will be sitting down with them and explaining where we are."

As far as we are concerned, all the contracts transferred

The squad are contracted to Rangers Football Club plc, which is soon to be liquidated, and Green wants the deals to be moved across to his new company, which now has ownership of Ibrox Stadium and the Murray Park training ground.

The "newco" route was taken by Green's group after a company voluntary arrangement (CVA) proposal was not approved.

Players agreed wage cuts in March as the club, which entered administration the month before, reduced costs to fulfil their remaining fixtures for the 2011-12 season.

In return for reduced terms, some players had release clauses added to their contracts that allow them to leave if a set fee is offered.

Rangers players out of contract

A number of contracts, including those of defender Sasa Papac and forward Sone Aluko, end this summer, and the former has stated he will be moving on.

Players are due to start reporting back to Murray Park for fitness training on 28 June.

"From the moment HMRC announced they wouldn't support the CVA, we contacted the staff and had a meeting with them and the administrator made them aware," added Green.

"We as a newco started having discussions and, as far as we are concerned, all the contracts transferred under Tupe [regulations].

"Of course, the difficulty is some of the players haven't been around and the likes of [Carlos] Bocanegra have been away on international duty with the USA team.

"They've also been having holidays and taking their families away, so it has been more difficult with the playing staff than the non-playing staff.

"We've been speaking to the PFA [union] though and to individual agents."

Meanwhile, Aluko has told BBC Sport he is happy at Rangers but that his future there is uncertain.