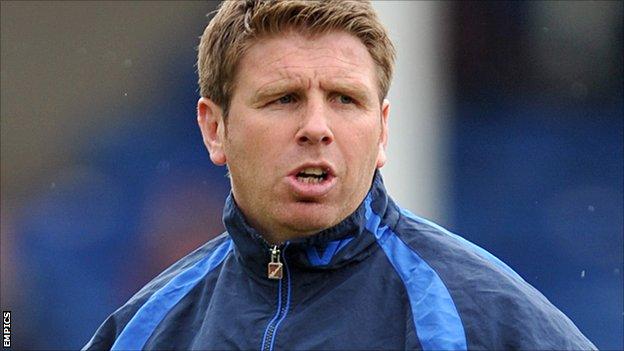 Former Darlington boss David Hodgson has backed Martin Gray to lead the club back up the non-league ladder.

The Quakers were relegated from the Blue Square Bet Premier last season and, subject to appeal, the Football Association imposed a further drop.

Hodgson told BBC Tees that Gray, who was appointed manager last month, had a work ethic "to match anyone".

He said: "He's mellowed, not as mad as he was, he's the right person now to guarantee getting Darlington promoted."

The failure of DFC 1883 Limited group to secure a Company Voluntary Arrangement with creditors Left the Quakers facing a climb of five divisions if they are to follow the example of clubs like Aldershot and Accrington Stanley and return to the Football League.

"It's going to take time, lots of hard work, (but) with Martin in charge they've got somebody who will graft," said Hodgson.

He has not been part of the DFC 1883 group involved with the purchase of assets relating to the football club, but will undertake a consultancy role.

"The people have asked if I will assist on the advisory panel," he added.

"I'm willing to help if it won't upset my private life, as my wife is against me getting involved again."