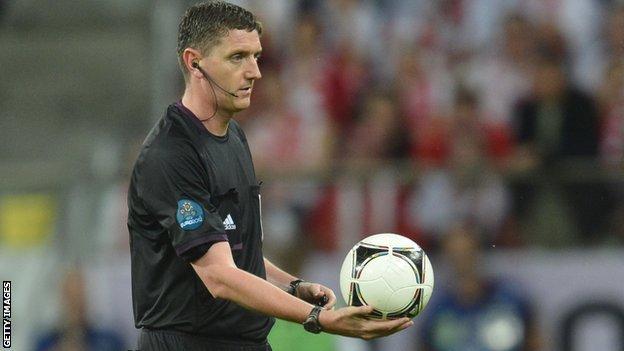 Scottish referee Craig Thomson has been handed the role of fourth official for the Euro 2012 quarter-final between France and holders Spain.

Another Scot, Alasdair Ross, will be one of the fifth officials for the match at Donetsk's Donbass Arena.

Scottish FA head of refereeing John Fleming: "This is fantastic news for the Scottish FA and huge boost for refereeing in Scotland."

Italian Nicola Rizzoli will be in charge of Saturday's encounter.

"Twelve refereeing teams were initially appointed to officiate at the tournament and Uefa have now reduced that to eight for the final matches and I am delighted our officials have been asked to stay," added Fleming.

"Craig and his team have performed well in their matches to date and this has now been recognised by Uefa.

"I am confident that they will continue to do themselves and the country proud."

Thomson has already officiated two matches at the finals and he, Ross and fellow countrymen Euan Norris, Willie Collum and Derek Rose are likely to find out on Monday whether they will be needed for the semi-final stage.

England's Howard Webb will take charge of the first last-eight match between Portugal and the Czech Republic on Thursday.