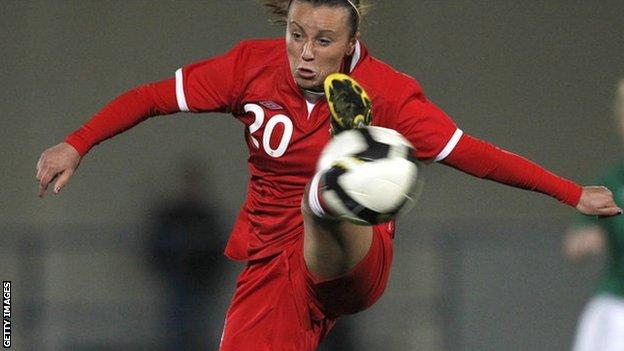 Natasha Harding scored a first-half hat-trick as Wales Women turned in a fine display in their Euro 2013 qualifier against Israel in Wrexham.

The Cardiff City Ladies forward finished off a flowing move after just three minutes, then twice made the most of slack corner marking to head home.

Midfielder Sarah Wiltshire scored the pick of the evening's goals with a curler from just outside the area.

The result, coupled with their 1-0 win over the Republic of Ireland in Cork last Saturday, moves Wales up to second in Group 4 with 10 points from seven games.

Scotland also have 10 points but have played two fewer games, while France top the group on 18 points and have played six games.

Wales will complete their campaign on home soil against Scotland on 15 September, with the venue to be confirmed.

The group winners and best runners-up progress to the final tournament, while the other six runners-up go to the play-offs on 20/21 and 24/25 October for a place in Sweden.