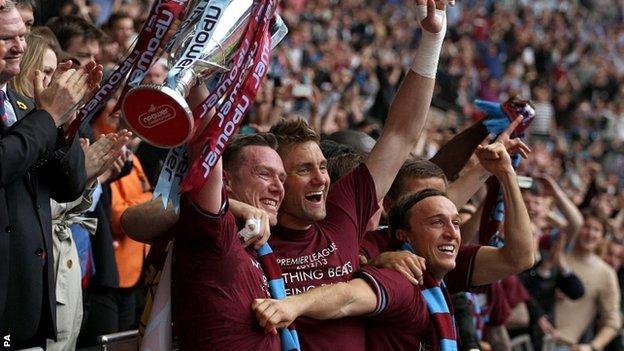 Robert Green will join Queens Park Rangers when his West Ham contract expires at the end of this month.

The 32-year-old goalkeeper, who is currently with the England squad at Euro 2012, will sign a two-year deal.

QPR boss Mark Hughes said: "He's got all the characteristics of a top keeper and he'll be a huge addition for us."

"It's an exciting period for everybody connected to QPR and I can't wait to get started," added Green, who spent six years at Upton Park.

"I'm excited about the challenge ahead and hugely encouraged by the direction in which the owners and Mark Hughes are looking to take the club."

The 6ft 3in keeper, who has won 12 senior caps, started his career at Norwich before joining West Ham in 2006 for £2m where he went on to make more than 200 appearances.

His last game for the East London side shirt was at Wembley in May, when West Ham beat Blackpool 2-1 in the Championship play-off final.

The Hammers were keen to retain Green, with joint-chairman David Gold writing on Twitter last month: "Robert Green is a free agent, he has chosen to move on.

After making his international debut against Colombia in 2005, Green was out of the England side until 2009 when he played a role in the successful qualification campaign for the 2010 World Cup in South Africa.

He retained his place in Fabio Capello's squad for the tournament and was picked to face the United States in England's opening group game.

But that match will forever be remembered for Green allowing Clint Dempsey's 25-yard shot to squirm under his body and roll over the line in a 1-1 draw.

Green has since recovered, and remains in the England squad as back-up to Manchester City's Joe Hart. He made his last international appearance against Norway in one of England's Euro 2012 warm-up games.